Once again, it appears the phones have it.  Not to be outdone by the iPhone, Windows Mobile units could be doing a whole lot more in the future.  I would guess you might want to put the phone on vibrate while doing an ultra sound so as not to affect the outcome (grin).

I don’t quite understand the biopsy function yet, but perhaps more information will follow soon.  Cell phones are ending up in places we never thought of before.  If the price is around $500.00, perhaps the wireless carrier will give a break on the price with a 2 year contract (grin).  One day we may have to start doing our own ultra sounds before arriving at the ER.  BD

We don't know when these might be commercially available, but they are hoping to sell them for around $500 -- significantly cheaper than many portable ultrasounds, which can cost almost $30,000. 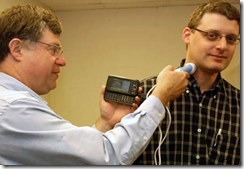