This is extremely rare and does not constitute being screened at this age for breast cancer.  It was a tumor that was notice and protruding a bit around her rib cage.  There is a website devoted to her battle.  She is under going chemotherapy and then the news became a little worse as the cancer had spread to her lymph nodes.

It is tough enough to battle this as an adult, but 10 years old and having to fight the cancer battle takes a lot of courage.  BD

But for the parents of 10-year-old Hannah Powell-Auslam of Fullerton, Calif., who learned in early April that their daughter had breast cancer, the news was particularly hard to swallow.

"It should be the furthest thing from your mind," Hannah's mother Carrie Auslam told reporters from KCAL-TV in Los Angeles. "Ten-year-olds don't get breast cancer." 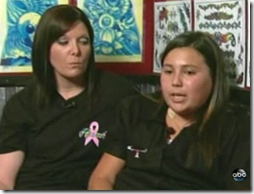 According to the family Web site documenting Hannah's fight against her cancer, Hannah underwent surgery to remove her breast on May 7, and she will likely progress to chemotherapy to minimize the chances that the cancer will spread or recur.

Dr. Daniel Hayes, clinical director of the Breast Oncology Program at the University of Michigan Comprehensive Cancer Center in Ann Arbor, agreed that there was no need for young girls to begin unnecessary cancer screening.

"This is not a major public health issue, and there is no 'take home' message," he said. "What we don't want is a bunch of young girls having unnecessary biopsies or, worse, mammograms."