Just this week the government announced their website and gathering of information relative to personal health records.  It appears that a couple

states are already working on such a project themselves.  I did some poking around on the Washington site since the Oregon site requires a log on so I couldn’t get very far there.  Two of the pilots are using HealthVault and one is using Google Health.  Maybe some opportunity for collaboration for the feds?  If you live in the area, might be worth checking out.

From the Washington web site:

“The goal of this pilot project is to demonstrate how a consumer-controlled health record bank would work for real patients and their doctors. The vision is to create a secure place for copies of patients’ health and medical records from various health care sources to be populated and stored. Patients would then control with whom the information could be shared.

A health record bank may in time be defined as an organization similar to a traditional bank, but one that serves as a repository for storing and maintaining a patient’s lifetime health and medical records. The health record bank would store copies of records from multiple sources and ensure that the individual always has complete control over who accesses that copy of their information. 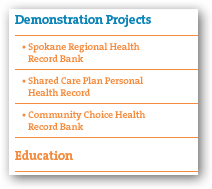 The demonstration project hopes to create a functional health record bank that will receive copies of patients’ medical information from their doctor, a hospital, or other health care entity. Through the health record bank, patients will have access to their health information in a form they can review, confirm and present to their doctors. The information will initially be available in a well organized printable format. The records will be managed by patients and organized into a format that, when brought to their doctors, will directly support the flow of information from patient to doctor to support clinical decision making.”

Speaking of pilots, has anyone seen any updates on the Medicare Personal Health Record Pilot that began in January for 4 states?  I have not seen anything but I could have missed it.

Is anyone out there promoting it?  BD

Hospitals and doctors’ offices are traditionally the keepers of personal medical records in the U.S. But now there’s a movement to give people more access to their own medical information.

Washington and Oregon are each developing what are known as online “health record banks.” Those allow people to create and maintain their own medical files.

The fact that Davies has a Google Health account isn’t unique. Anyone can create their own for free. What makes this different is that her pharmacist and her doctor can also transfer information into her account.

They can do that because Davies is enrolled in one of three pilot projects designed to develop these personal health record banks in Washington. The others are in Cashmere, in the north central part of the state, and in Bellingham.

The Economy – One more Reason to think about a Free PHR