written about Rosetta Genomics with lung cancer and their tests and now we have additional information potentially available from a lab in my back yard.  Thousands of people with cancer never know where their cancer originates, breast, liver, etc. and the reason this is so important lies in the treatment plans which are specific to work and basically re-train the protein or gene to react and function differently, in other words the targeted gene.  If cancer of the unknown primary is found, then perhaps better specific drugs are given that would target that type of cancer, in other words someone with breast cancer would not be given a drug that is better targeted for liver cancer as a simple example.

The one genetic test provided will help determine the possibility of recurrences with breast cancer and we all know the story on that one how it does seem to come back with many.  BD

Agendia, which specializes in molecular cancer diagnostics, is opening a U.S. clinical genomics laboratory in Huntington Beach.
The facility increases Agendia's U.S. reach and helps the company meet the demand for MammaPrint, a gene expression profiling system that assesses the risk of recurrence in patients suffering from breast cancer. The lab will also broaden clinical trial participation and expand new research and development efforts.

Established in 2003, Agendia has already introduced three tests to the market. Since 2003, the DiscoverPrint service has been offered to pharmaceutical companies focusing on the development of cancer therapeutics, enabling them to select the most appropriate candidates for clinical trials of personalized therapeutics. 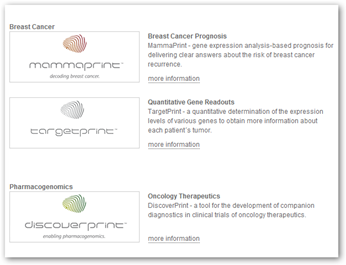 In 2004, Agendia became the first company to commercialize a prognostic test that predicts the risk of breast cancer recurrence (MammaPrint). The company also introduced CupPrint, a test to identify the origin of a metastasis when the location of the primary tumor is unknown, so called “Cancer of Unknown Primary”.
In 2007, MammaPrint became the first in vitro Diagnostic Multivariate Index Assay (IVDMIA) to acquire clearance from the US Food and Drug Administration (FDA). Agendia recently presented its new colon cancer prognosis profile, ColoPrint, which is currently undergoing further validation in the anticipation of developing a test to predict the likelihood of the cancer spreading at an early stage in the disease.

Breast Cancer May Regress On Own, Controversial Report Says Up To 22 Percent Of Cases May Disappear Without Treatment

Breast Cancer Treatments – What is a MammoSite?