This is indeed a strange side effect, and obviously he might have trouble with biometric devices for logging on with a fingerprint too.  Now he will need to carry a letter stating the reason for the lack of prints from his doctor.  This had to be a new one for airport security here in the US.  BD

PARIS - A patient who took a drug for cancer lost his fingerprints, which caused him to be detained for hours when he tried to visit the United States, according to an unusual case reported on Wednesday.

Capecitabine's side effects include inflammation of the palms and soles of the feet. The skin can peel, bleed and develop ulcers, and with time can cause fingerprints to be eradicated, Tan said. 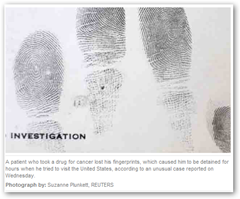 The 62-year-old patient had been taking capecitabine, a follow-up drug for chemotherapy for cancer of the head and neck, Singaporean specialist Eng-Huat Tan and colleagues recounted in a letter to the British journal Annals of Oncology.

Cancer drug dabbed away the dabs