One physician sees patients and submits reimbursements on behalf of the patients, in other words not your typical insurance contractual relationship.  He is a pain management physician.  The organization is open to both patients and physicians.  This may just be the content the way it was written, but below insurers consider the doctor the “second set” of eyes?  Only myself speaking, I think they are the first or should be by all means and perhaps this is the real reason for getting the committee started, to get back in touch with who should be first and I think we can all agree 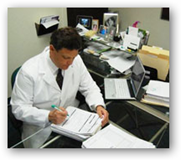 Monterey physician Bradley Carpentier found himself spending so much time fighting with health insurers to get approvals for the treatments he prescribed for his patients that he decided to wage his own lobbying effort.

Carpentier formed a new political action committee - Stop Practicing Medicine - to target the long-standing practice of insurers hiring doctors to review physician decisions, even though the insurer-hired doctors had never seen or talked to the patient whose care they were scrutinizing.

Insurers defend the practice, saying such doctors often serve as a second set of eyes to ensure patients are receiving the most appropriate and effective treatments. But Carpentier, along with patients and other doctors who support his position, says insurers are denying and delaying care.

The survey, conducted by a Seattle research firm for the California Medical Association, found 84 percent felt pressured to change the way they treat a patient because of a restriction from an insurance company and 86 percent admitted selecting a course of treatment they might not otherwise have chosen because of the pressure.

But Carpentier said he's seeing an increase in pushback from health plans, prompting him to refuse most insurers and, instead, treat his patients and submit reimbursement forms on their behalf. He formed Stop Practicing Medicine, he said, to raise awareness of insurance interference as lawmakers and the Obama administration begin efforts to overhaul the health care system. The organization began recruiting patient and physician members last month.

Doctor pushes back against insurer scrutiny