It’s been a while since we heard about insulin that can be inhaled, as Pfizer abandoned their drug called Exubera, which everyone somewhat commented that it looked more like a bong.  You can see from the picture here, this one does not look like a bong and is much smaller in size. Incase you missed any of the stories about it from a while back and want to compare the size, you can link here to a video.

Is it a bong or Exubera?

The jury is still out but we could still end up with insulin that is inhaled, a much easier process than injections by all means and less sticks.  BD

MannKind Corp.’s stock jumped 14 percent Monday after the Valencia biotech said the U.S. Food and Drug Administration accepted and is now reviewing its application for the inhaled insulin drug Afresa. 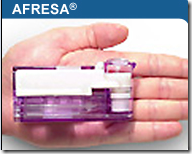 Having the regulator accept the application on the company’s first try is considered a significant milestone. Competitor Pfizer Inc. pulled a similar drug off the market for safety reasons, and other companies later dropped their own development programs.

We believe that the pharmacokinetic profile of AFRESA® sets it apart from all other insulin products. AFRESA®'s particles dissolve upon contact with the lung surface, releasing insulin that rapidly enters the bloodstream. It achieves peak insulin levels within 12-14 minutes of administration, which more closely mimics the natural release of insulin than any other insulin preparation.

In collaboration with a marketing partner, we plan to establish AFRESA® as the preferred prandial drug therapy for diabetes care.