No doubt there will be shortages if the reactor in Canada ends up being down for 8 months potentially.  It appears that France, Argentina and Belgium will be holding up the show with production as there are only 5 facilities in the world who manufacture the product.   If you are being scheduled for treatments, be aware there could be some delays as two other reactors are scheduled to be pulled off line for scheduled maintenance.  BD

Nuclear medicine specialists say the crunch for patients is coming after it was announced yesterday that the Canadian reactor responsible for one-third of the world's medical isotopes will be shut down for at least three months.

The 51-year-old NRU unit at Chalk River, Ont., will be offline though July when the reactor in the Netherlands, which produces another third of the world's supply, is scheduled to shut down for a month of maintenance. 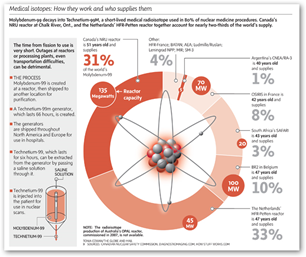 But the South African reactor that is providing additional amounts of the material to make up for the shortage caused by the loss of the NRU will shut down next week for required maintenance.

Isotope Update: Plant Could be Down for Months – Nuclear Medicine Diagnostics Can Expect Delays

Medical Isotopes - Will there be enough, treatment delays through October possible at US Hospitals