What’s an arm or leg worth from a cadaver?  Evidently quite a bit when you look at the money made from the scheme.  This was all over the news a while back and now we have the convictions, steal body parts that are donated, it’s grand theft.

It also calls for UCLA to better monitor the program, which was shut down for 18 months.  The director of the program Henry Reid, gave Nelson access and has already pleaded guilty for his role.  When people take time to donate their body parts for a good cause, it seems very wrong for others to profit, granted some of the parts were sold for research, but even if that is the case, those funds should go back to the university to help further education and not individual profits.  BD 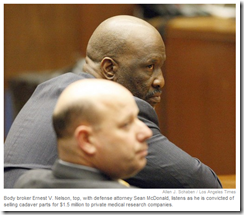 The bodies were donated to UCLA for medical and scientific research at the university. The scandal over the sale of the body parts became public in 2004 and prompted the closure of the program for more than 18 months.

Prosecutors said Nelson acted as the middleman, selling hundreds of body parts to various research companies around the country, including pharmaceutical giant Johnson & Johnson. The conspiracy was uncovered when a state health investigator grew suspicious that Nelson was fraudulently claiming that the parts had been screened for infectious diseases before selling them.

The jury took about a day to convict Nelson, who faces a maximum sentence of 10 years in prison. Reid, an embalmer from Anaheim, is serving more than four years in prison.  Nelson, who operated a body-broker business that supplied body parts to private medical research companies, has long insisted that UCLA authorized the sales of the cadavers.

UCLA released a statement saying it has improved its tracking and security of cadavers donated to the program to ensure that they are used for research and student education.