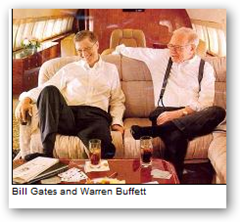 The organizers were none other than Bill Gates and Warren Buffett for the event.  There have been meetings all over the US of late, everyone striving to find a better future and better world.  As the article states, Mr. Gates was the most impressive, (he’s the one with the technology and brains that runs everything else) and Oprah was listening.  All have contributed millions of dollars to philanthropy and of course want to see all those efforts succeed.  Ted Turner was slated as being the most vocal.  This was a pretty big collection of millionaires to say the least, but perhaps a great meeting of the minds.

The meeting took place on May 5th at Rockefeller University in New York.  Rockefeller declined to speak about the meeting as far as adding any subject material and said he has frequent meetings with friends.  Both Bill Gates and Oprah have been staunch leaders in promoting education, as healthcare and all other issues stem right back down to the one basic item that needs to be addressed.

One of my favorite videos of Warren Buffet I have posted here is:  Beware of Geeks Bearing Formulas  How does he know this, hanging out with Bill Gates will offer a lot of knowledge perhaps.  Bill Gates has spent numerous occasions addressing our Congress, and they too need education, as some members still don’t even use a computer or use it very little and all the economic and other

decisions made today are based on “Business Intelligence” so there’s a lot of room there for growth too, as how can they make intelligent decisions without some basic skills, you can’t rely on your staff to do “everything’ for you.

Unfortunately the world is full of “old dogs who won’t learn new tricks”.

Also, one of the Gates Foundation recent efforts to help educate includes the agreement with Viacom.  If we can’t get folks to read, the foundation is “paying” for educational spots and encouraging television shows to include health related educational topics.  Most foundations have to wait until time given for this purpose, but they are paying for it, big difference in putting the effort forward and being pro-active to help reach the couch potatoes of the US.

Oprah has done some wonderful efforts too with healthcare education, as in sponsoring a new show for Dr. Oz who brings us all kinds of knowledge with healthcare, and one of my favorites was the portion done on “regenerative medicine”.  With regenerative Medicine, I have been fortunate enough to post some interviews with companies like Cook Medical, one of the companies creating some of the new healthcare technology and products.  In writing this blog I find out about a lot of treatment plans, science, life sciences, genomic breakthroughs that the average person is not aware of, things we think are Sci-Fi, but they are not, they are here today.  When I speak to friends and others about what is out there and what is possible, I see a lot of “dropped jaws”, and again these are mostly people who are busy and on the whole may not do a lot of reading. That is part of the purpose of this blog too, to bring a conduit together to at least offer an area where to at least keep up on some of what is happening and if you don’t find it here, there’s a ton of links to other bloggers and references on the site.

I hope we hear more about what transpired and hopefully some of their efforts will help in the education process for all and on the other hand create some real solutions for getting rid of “Magpie Healthcare”.  BD

The secret is out on a clandestine billionaires' summit held in Manhattan earlier this month, when some of the wealthiest Americans met behind closed doors to plot strategies for weathering the economic downturn and coordinating their global philanthropic efforts.

Topic No. 1 during the May 5 conclave was which of the moguls' favorite causes -- such as disease control or government reform -- needed extra help during the downturn. They also sought ways to encourage the common man to keep making small-change donations, an aide to one participant said. IrishCentral.com, which first reported on the powwow, said Gates and Buffett also solicited views on how the group should respond to the global economic climate.

In all, the attendees have donated a collective $70 billion since 1996, according to the Chronicle of Philanthropy.

In their letter of invitation, Gates, Buffett and Rockefeller cited the worldwide recession and the urgent need to plan for the future. They said they wanted to hear the views of a broad range of key leaders in the financial and philanthropic fields.