Corporate acquisitions certainly are not simple today.  Humana purchased Arcadian and in the interest of not having a monopoly they need to sell off and divest part of that business.  This is fine for the that sake, but the current policy holders get shuffled to Cigna.  In addition there are additional plans that need to be sold off and as you can read they are up for grabs to purchase and may end up with Blue Cross or United Healthcare.  The purchase was announced back in August of 2011, almost a year ago.  The blue states are where Arcadian operates, 15 states.

So here we go again with the “insured shuffle” for healthcare.  BD 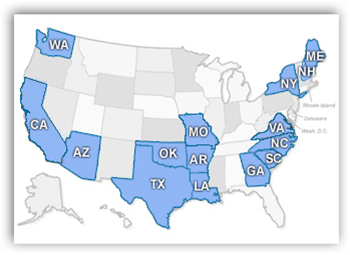 CIGNA Corp. (CI) announced its plans to purchase selected Medicare Advantage (“MA”) plans in the state of Texas and Arkansas. Cigna will buy the plans in three markets - Amarillo, Longview-Marshall and Texarkana - from Humana.

The transaction is subject to regulatory approvals and is expected to be complete by the end of 2012.

Humana got regulatory approval to buy Arcadian only on the condition that the former will divest Arcadian’s Medicare Advantage business in 51 counties in five states, namely, Arizona, Arkansas, Louisiana, Oklahoma and Texas. These divestitures were aimed at preventing monopoly in the states where the merging entities were the chief rivals before the acquisition, and hence, a union will virtually leave no competition. While Cigna has bought Texas and Arkansas MA plans, other contenders for the remaining plans may be WellPoint Inc. (WLP) and UnitedHealth Group Inc. (UNH). http://finance.yahoo.com/news/cigna-buy-ma-plans-210134288.html