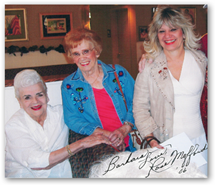 and I can do what I feel like writing about today <grin>.  Rose Mofford is a long time friend of mine who I met when I worked at the State Capitol years ago (like my first job) and I knew her when she was Assistant Secretary of State.  There is nobody more deserving of the recognition than Rose.  By the way, she reads this blog everyday too:)  Here we are in 2006 with my mother as well.    We do have some great memories and funny stories from way back that were maybe not funny at the time, but now they are, like the banana tree.  That is an inside story and those that worked there 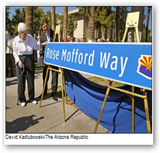 30 years ago will remember it well.  It was a bit of the “wild west” back then.    She “Rose” to the occasion twice with becoming Secretary of State and then Governor.  There’s nobody that has more Kachina dolls than Rose and her collection is wonderful as I used to watch as the Arizona Indians from the reservations, who she really helped, give her beautiful representations of their handiwork with hand created dolls, which represents a big part of Arizona history.  I still have a few of those myself.  You can watch the video below and hear what she has to say about all of this.  Here’s the picture, courtesy of the Arizona Republic Newspaper of the street sign that’s going Rose’s way.

"Little did I think that I would have to drive down Rose Mofford's Way to get to Wes Bolin's Plaza," Mofford quipped.”…Wes Bolin was a former Secretary of State and I hope she saves me one of those key chains too:)  Happy 90th birthday Rose!  BD

A crowd of flag-waving fans flocked to the state Capitol on Sunday to celebrate the 90th birthday of one of the state's most beloved figures, former Gov. Rose Mofford.

Her hair in a scaled-down version of her trademark French chignon and her eyes rimmed by her signature false lashes, Mofford radiated goodwill as she greeted politicians, government workers and friends who came to honor her.

Mofford spent most of her life serving Arizona, taking

Mofford, a Globe native and former A-1 Queens softball player, became the state's first female governor in 1988, bringing light to the dark cloud that some say shrouded Arizona when former Gov. Evan Mecham was impeached. http://www.azcentral.com/12news/news/articles/2012/06/10/20120610rose-mofford-honored-governor.html