This is just a horrible story.  If you have kept up 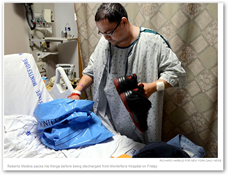 with the news, his sister was donating one of her kidneys so he could live and she died on the operating table when the surgeons severed her aorta.  The hospital has now shut down the transplant program.  She bled to death during the donor operation.  Deaths during a transplant harvest are pretty rare and this was the first for Montefiore which is highly regarded for their transplant procedures. After the death and failure the hospital and other hospitals put him at the top of the list for a transplant but the Organ Donor network had not approved the the process of speeding it up for him.  In view of losing his sister, I don’t see anything wrong with this and it’s hard to fathom this entire story to say the least.  Now he had to check out and I certainly hope he’s on the transplant list by all means.  The link below shows the progress that is being made with stem cells and they are getting closer to “growing” kidneys and I hope this moves forward quickly.  You can read the full story at the New York Daily News which shows the patient in the picture above leaving the hospital.  BD

A Bronx man left Montefiore Medical center without a promised kidney transplant for a second time Friday and learned that he was never in line to get one.

“I have so much anger. I am emotionally drowned,” Roberto Medina, 39, told the Daily News before he was discharged from Montefiore Medical.

Two weeks ago, his sister Yolanda, 41, went under the knife at Montefiore to donate an organ to him and died on the operating table.

Surgeons apparently severed her aorta. They couldn’t save the mother of three — or even preserve the kidney to give to her brother.

After the tragedy made headlines, the hospital and the New York Organ Donor Network summoned Medina on Wednesday night, saying a new kidney from a cadaver had been found for him.

But after a day of waiting, the procedure was abruptly called off. The hospital told the family that it had not yet gotten the necessary federal approval for Medina to leapfrog over others on the list. http://www.nydailynews.com/new-york/bronx/kidney-transplants-bungled-bronx-man-returning-home-article-1.1092060

Sunday, June 10, 2012
Medically Related , My Commentaries , Other Items of Interest