In reading this article, this is what is happening now as folks are calling in the “consultants” who they have to pay to teach the doctors,

nurses and others on staff how to document so claims are paid correctly and promptly.  Who pays for this, the hospitals, so one more expense coming on board for many hospitals that are already financially strapped.  This is kind of a catch 22 item as if they don’t invest they run the gambit of lower compensation and on the other hand they also look to make sure the hospital is not over charging. You wonder sometimes when you read about all these “fines” that hospitals pay for billing errors, is the hospitals no coding right or is it the software and lack of education rolled in there?  Sure there are the obvious cases but each case is it’s own.   You can even buy a shirt that says don’t bother me, I’m coding.  Some insurance companies, like United Healthcare also created their own clearinghouse subsidiary to audit the bills before they are sent on.  Most providers today do use some type of clearinghouse to check their work for accuracy and with a clearinghouse subsidiary it’s a bigger piece of the pie for overall corporate revenues as this subsidiary servers to generate revenue by subscriptions whereby the hospitals pay for this service, so they could end up with 2 legs of the process here with medical billing with clearinghouse services subsidiaries that check for accuracy before it hits their claims processing.  United has so many subsidiaries anyway though and have recently hired former Minnesota Assistant Attorney General as general counsel as well as hiring the former HHS executive created most of the provisions of the healthcare law.

Meanwhile back at the ranch, HHS Secretary Sebelius is counting on algorithms only while the powerful folks formerly 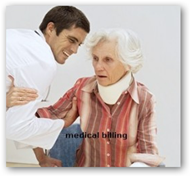 in government leave and move over to the “for profit” side and they will have an advantage for sure at United as these folks bring with them knowledge as to how the government operates or doesn’t operate on the other side.  This kind of reminds me of the PBS 4 part documentary to where they spoke with former brokers who made a lot of money and they all admitted they were given the tasks to “find loopholes” so they could make even more money.  Watch this PBS 4 part video series on Wall Street

So the long and short of this is more training of doctors and nurses with additional expenditures to create faster claim processing for the hospitals while the bottom line of insurers’ subsidiaries continues to grow.  No wonder medical records are taking on a new reputation as they are now being created for the benefits of compensation rather than clinical care.  There was an article on the web this week that more doctors are using electronic medical records and liking it less, and this kind of tells the story why as now we have yet one more layer of expertise to use and pay for to make all of this happen, and the payers benefit, not so much the patients for the most part.  BD

When it comes to patients getting an error-free medical bill, the name of the game for doctors and hospitals is documentation.

That's because if the care isn't recorded and well-documented while it's being provided, insurance companies and federal payers will ask for more information later. Payment for services slows down, and chances for mistakes skyrocket.

That can mean checking that seemingly obvious details are recorded. For instance, each time a nurse starts an IV, she must write it down because there is a charge for the equipment used, Bauschka explained.

That chart -- whether it is electronic or paper -- is also key for the coders, who translate the care documented on the chart into billable codes, said Kathy DeVault, director of professional practice at the national industry organization American Health Information Management Association. Many health systems and doctors' offices struggle with documentation because of a lack of staff training, DeVault said, adding that "what seems very simple from the outside looking in, is very complex." http://www.cleveland.com/healthfit/index.ssf/2012/06/many_providers_turn_paperwork.html