Juan Enriquez is a fascinating person to listen to as he has gone the gambit with Craig Venter, who you may or may not be aware of,

but his creation of synthetic cells is all over the news from time to time.  Juan states and emphasizes how “fast” this is all moving and it really is.  Actually back in December of 2010, this was the big announcement made by Venter and he too is a guest on several of the TED conventions.  The group also includes current NIH Director, Francis Collins when it comes to “cracking the code”.

He tackles some interesting topics here and a lot of it comes back to the massive amounts of information we handle today and quips a bit about a brain upgrade, listen and see what that is all about.

Juan Enriquez–Will our Kids be the same species

Throughout human evolution, multiple versions of humans co-existed. Could we be mid-upgrade now? At TEDxSummit, Juan Enriquez sweeps across time and space to bring us to the present moment -- and shows how technology is revealing evidence that suggests rapid evolution may be under way.

Here’s yet one more TED video from Juan, more specific on synthetic genetics.  We are generating “life” code much faster than we can build computers to store it.  Software makes it’s own hardware.  How and where we make stuff is changing and it’s all in Life Sciences in everything from farming to creating a drug or vaccine.  The chart below shows how drugs were being discovered in the 50s to where we are now with dollars spent.  As you can see the number is way down as the cost and research and development is so high.  He asks that maybe we are killing more people with regulation than saving and where is the “cross over” point.  He advocates the cost of measuring versus not measuring.  BD 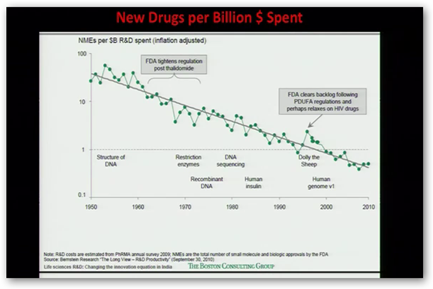