We have probably all read about orthopedic procedures

that have been used to allow re-growth of muscles and small portions of bones, but this is a process that grows the entire bone outside of the patient’s body.  It makes sense as dentists have used synthetic bone material to help seat implants in the jaw with building up bone material.  I know I have had that done. Trials have already been conducted with animals and they work and the goal here is to produce bigger bones of course.  We all know what bone grafts are and this could potentially replace that procedure it appears.  They are also working with growing cartilage at both ends of the bones.  Human trials are slated to begin later this year.    There’s no rejection as the bones are grown from the patients own cells.  It took about a month to grow a fully formed living human bone that was a couple of inches long.  Just think in the case of accidents where bones are shattered, this could really be huge in being able to grow a replacement.  As with growing organs, a scaffold is used.  The entire article can be read at the Telegraph at the link below and here’s a video about what the Technion Institute of Research in Israel is all about.  BD

Technion Institute of Research in Israel
Scientists have grown human bone from stem cells in a laboratory.

The development opens the way for patients to have broken bones repaired or even replaced with entire new ones grown outside the body from a patient's own cells. 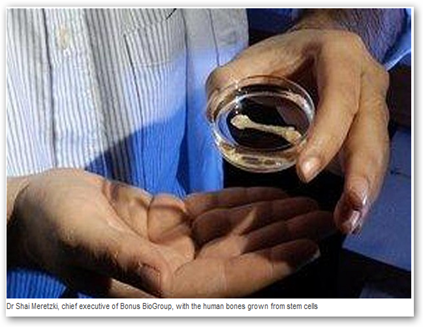 The researchers started with stem cells taken from fat tissue. It took around a month to grow them into sections of fully-formed living human bone up to a couple of inches long. The first trial in patients is on course to be conducted later this year, by an Israeli biotechnology company that has been working with academics on the technology. The technology, which has been developed along with researchers at the Technion Institute of Research in Israel, uses three dimensional scans of the damaged bone to build a gel-like scaffold that matches the shape. Already animals have successfully received bone transplants. The scientists were able to insert almost an inch of laboratory-grown human bone into the middle section of a rat's leg bone, where it successfully merged with the remaining animal bone. http://www.telegraph.co.uk/science/science-news/9321330/Human-bones-grown-from-fat-in-laboratory.html