This is a little break away from the normal healthcare blogs but it’s related as these supercomputers are in healthcare.  DOE even rents space

out for other agencies and I wrote about that a while back.  Too bad our Congress has not figured out that they too could maybe ask the DOE for some super computing space to figure out their data needs when making laws:)  Looks like we booted China out of the #1 spot, at least for now.

I have mentioned it a few times around here how Congress would benefit and get smarter and bonus points as with intelligence grows, the lobbyists efforts will drop a bit as our lawmakers could tell the difference a little better between marketing information an actual data.

Use of IBMWatson Technology in Congress Would Allow For Smarter Laws and Decision Processes With Bonus Points For Lowering Over All Impact of Lobbyists This is kind of an important computer too as it is used the understanding of weapons science as well as vastly improved estimates of uncertainty in predictions of weapons behavior, the nuke-puter that simulates and crunches numbers as a pace surpassing all others.  It has 1.6 petabytes of memory 96 racks and 1.6 million cores…that last number kind of blows me away and this is IBM engineering at work.  BD 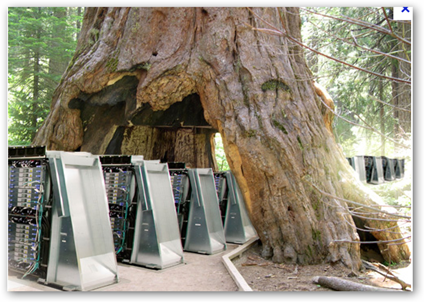 The twice-a-year list of the Top 500 supercomputers documents the most powerful systems on the planet. Many of these supercomputers are striking not just for their processing power, but for their design and appearance as well. Here’s a look at the top finishers in the latest Top 500 list, which was released Monday, June 18 was announced at the 2011 convention. The new Top 500 champion is Sequoia, a Blue Gene/Q

supercomputer built on IBM Power architecture at the Department of Energy’s Lawrence Livermore National Laboratory in California. The emergence of Sequoia has returned the U.S. to the top spot of the Top500 list for the first time since November 2009. Sequoia consists of 96 racks; 98,304 compute nodes, 1.6 million cores and 1.6 petabytes of memory, and hit an impressive new record of 16.32 Petaflops  on the Linpack benchmark. The National Nuclear Security Administration uses Sequoia to research the safety, security and reliability of the United States’ nuclear deterrent – replacing the need for underground testing. The Blue Gene/Q Sequoia is eight times more powerful than its predecessor BlueGene/L technology. http://www.datacenterknowledge.com/top-10-supercomputers-illustrated-june-2012/