of this blog.  I was one of the very first adopters of a tablet computer and I think that goes back to around 2001.  It’s been a long time and I currently have an Acer Windows Tablet.  The only thing that it lacks is enough battery life to make me happy but you can’t have everything.  I still have this particular tablet as well from Tablet Kiosk and you see it regularly on CSI New York, except they use a black one.

Way back when I was still writing my medical records program I had it working with tablets too and the tip input bar.  In 2008 I ran 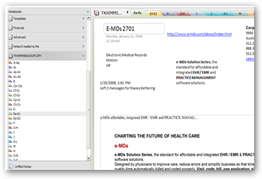 around HMMS with my tablet and One Note and in those days one was considered a “goober” if you had it in tote as most vendors only showed and used them in the booths:)  Today all that has changed but the article below is still very applicable on using One Note as “intelligence files” and really work a convention and get everything covered that you set out to do.  I did it and had everything I needed and One Note did the queries for my information both before and at the show.  I talked and wrote my notes in One Note.  Everyone kept coming up and asking me what booth others were in as I had that too":)  Just think this is only 4 years later and how far we have come with tablets.  You can see a sample image as to how my rough files looked before I began with all the notes I took.

HIMMS 2008 Summary - Getting organized is the trick The little Acer Arconia does ok for what I need now but it’s not a digitizer and I do miss that with having the option to be touch or a full digitizer on the unit, and my TabletKiosk model does both and I can switch back and forth.  If you have not caught a video of the new Surface Tablet you can view it below.  I’m one of the founding members of the Los Angeles Windows Mobile Group (Pocket PC) which has undergone a few other name changes too 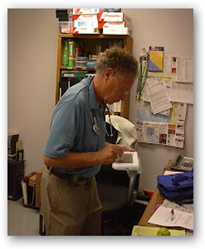 and I remember the one night back in Santa Monica at our meeting at Microsoft where we all got to see one of the first tablets previewed even before they were released and a special employee from Microsoft arrived to give us the unannounced prior presentation. I just wrote to a Microsoft Tablet MVP who made a video of it to see if he could dig it out for nostalgia purposes:)  The video quality is not what we have today but seeing this from 2001 would be fun to look back at.   I’ve mobile before it was cool to be mobile and Pocket PCs were not phones yet:) I did the mini UMPC round of tablets as well and this is one of my clients, a doctor a few years back using the small 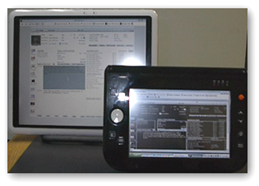 tablet to enter data in his medical records program in 2007.  At any rate I hope before too long that I am able to get my hands on one of the Surface units and really check it out.  Little humor, this is far cry from a Mike Arrington Crunch Pad for those that remember:)  It’s been a while so time for a little friendly reminder of the project. For your absolute utter enjoyment here’s a picture of a couple of tablets running my antiquated VB6 medical records system, although it was hot at the time and your screens could be any color you wanted:) If that picture did anything for you, there’s more at this link of some screenshots of the antiquated coder/blogger at work.  Boy the formatting was tough to get right for the little tablet.

The bigger unit with the Intel processor looks like the real

work horse and of course I will be interested to see what battery life is like as for years it seem as if you want more power you get less battery and even the IPAD with it’s wonderful engineering only does one program at a time and that’s how the battery can last so long.  They really did a good job on that design, however let’s see what Surface can do and for sure it stands to be a huge tool for the enterprise and healthcare world with medical records.  Tablets have come such a long way since that first little Acer I had years ago.  BD
Surface Tablet Video
http://www.youtube.com/watch?v=dpzu3HM2CIo&feature=player_embedded