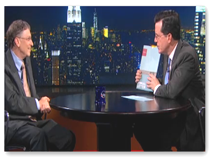 on the Colbert Report a couple times.  All the Gates Foundation discussions revolve mostly around healthcare and education.  Bill Gates talks about polio and the results seen on eradicating the disease.  Colbert asks why are you helping other countries instead of the US and Gates explains the focus in the US is education.  Polio was down to 250 cases in the world last year and the next report will say zero. Bill Gates says passion is ahead of data but it is part of the passion.  Colbert asks if other countries know if Bill Gates is an American.  He asks Bill Gates if he misses the intensity and coding at Microsoft.  Bill Gates says his approach to technology is a lot geekier than Steve Jobs was.  BD