Home » Insurance » Medically Related » My Commentaries » Is Medicare Saving Money And Cutting Costs? It Depends on the Day of the Week and What Article You Happen to Read…

being factual too, depending on the case of either the research person cheating outright or some were given erroneous material from the start .  On the actual cheating of course we all know money is at the root of it.  So yes, how do we know what’s what?  I guess we don’t really and sometimes some of the material we read depends on what’s being marketed too.  It’s a gray, gray world out there today at times. Here’s an example with information on ACOs on saving money for Medicare.  We all know they are needed in some fashion or another to save money and give better care and there’s no universal framework for a lot of it with all designing their programs to meet certain requirements and that too takes a lot of thought processes.  So, today I read this, HHS puts out a report that Affordable Care Act is having a substantial effect on reducing Medicare spending which I would say is a good thing.  This is relative to the Advance Payment ACOs model that exists today.  I see on the website that CMS is no longer accepting applications.    Here’s where additional information is found relative to the Shared Savings Program.  There’s getting to be way too much math in healthcare today it seems!  Folks are saying the same thing about investing in markets today too but this just trickles down to healthcare as well. Now back in September we had this come out to where HHS and DOJ said doctors and hospitals were cheating out there as the expenses on paying claims higher and were growing?  There was nothing specific referenced here either, so what big cases of fraud were found or what doctors were cheating?  Have ACOs made that much difference since September?  I would think maybe a little more time is needed.

You also have to take into account that one of the areas hospital struggle with are the 3rd parties out there to function as they promise to help save money and keep within the legal areas of their work and not carry around patient records on non encrypted computers that get stolen too.  The actions and services of the 3rd parties are needed for ACOs too.  For an example do you remember Accretive..shoot those folks even were showing actual patient records to investors on Wall Street.    Hospitals can’t hire them and also put out patrol to watch how they work too.  We never heard anything back on HCA either who sticks out like a sore thumb in this area.  Most all the breaches today in healthcare are coming back related to 3d parties.  This kind of makes sense that this would be the case as they are focused on algorithms and analytics more so than keeping patient records secure as they are there to make money.

In the billing and coding side of this, outside of real fraud we are just using algorithms to swap money and the markets work the same 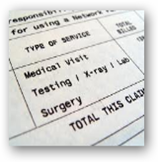 way, those algos move money and there’s a lot of waster time in chasing small billing disputes today and that can go on forever.  Last few days you have been hearing about the deficiencies on Wall Street with math errors, well healthcare has their big share too and to get everything perfect and aligned, well we will spend forever chasing all of this.  There has to be a time when someone makes a determination of how time are you going to chase and get a big brownie point or are you going to look at a big over all picture.  On the re-admission penalties it looks to me like we are “just swapping spit” back and forth and back and forth with a lot of it.

So what happens when numbers are higher than anticipated, do we run right out and do a witch hunt and make accusatory kind of silly statements like what happened in September and then a short time later talk about how Medicare is saving money?   I guess it all depends on the “topic of the day” and who needs get on the tallest soap box at times?  Doctors over all are billing better and getting money they didn’t bill for prior as for one example they were afraid to bill much past a 99213 regular office visit knowing that they may not have enough material to bill for a “real” extended visit.  With the use of electronic medical records, substantiating this is a lot easier and shoot 7-8 years ago when I wrote my EMR, that was an area of focus to help the doctors to get legitimate compensation for the work they did. Sometimes you do have to think about a little math as government executives and keep the politics out of the way.  This is not upcoding but rather getting paid for services “actually” rendered.  Now tell me how many doctors are not happy with legally being able to get paid for their time?   The letter that was sent out was because someone panicked it seems when seeing higher numbers and there were others besides me that felt the same and wrote about it. So back on topic are we saving money or spending more…check out the news tomorrow and see what point is being made, who’s trying to sell you something, sway your opinion, market a study, and so on.  Today I see all disputing the flu numbers..typical that this has become such a huge issue when the main focus is to get the awareness out and get the shots, but the sideline issues of calculating the math today on who is really sick and where is kind of stealing the show, i.e. “my algorithms are better than yours”.  Again, there’s way too much “math” in healthcare and the complex algorithms used today keep it that way so “only your hair dresser knows for sure” to quote an commercial from years back.  Those of you in the same age group will remember that one.  Sure there’s a lot of good intentions and people (no companies) working for solutions but at some point you bottom out as you get to where fixed costs will smack you in the face.  Every time you think you are saving today, tomorrow comes along and gulps up today’s savings whether it be a new drug, medical device, new insurance plan or even things like a hurricane that dump your numbers from yesterday in the toilet.  We have that with electronic medical records too and everyone all over this study on how they are not saving money.  They are definitely doing their job with better documentation  for sure but what are they, a bunch of algorithms. In the words of Bill Gates, “software is nothing but a bunch of algorithms working together”.  Sure there are savings in one area all the time, but you have another area that pops up like wild fire that requires more money so those big algorithmic savings studies just are not going to happen in a huge way.  We will see some savings as we get better at process and service  using technology for sure but it’s not “fix all” as some seem to think.  If you want to see some real duping go look at the Heritage project

for re-admissions to where they are looking for a “white knight algorithm” to fix all with a $3 million dollar carrot and this will go the same way as the Wellpoint $10 million dollar carrot to fix healthcare..impossible and not going to happen.   It’s the way the world works today and so many of the reports keep everybody algorithmically charmed into the fact that software can do anything, and well it can, but humans can’t.  BD