This is just too funny so tweeted a bit of this but what happened?  I have not been back to Google Plus for a couple of months and then a couple days ago I decided it was time for me to go back over and participate on their platform a little more.  Well I got over there and I was met with a screen that said your account is under suspension, as your name does not meet our names policies.  As you all are probably aware all the social networks are working to get your “real” names listed.  Why do they want this?  To sell data for one reason or another, mostly to those who want to target you for advertising.  I joined Google Plus when they were still in beta so not a new comer at all and I use my real name. So what is it about Barbara Duck that doesn’t meet policy…must be that “duck” thing.  It happens once in a while where a couple of company mail servers had to make an exception to my email address domain “ducknet”.  It certainly can’t be Barbara as there are a few million of those out there.  So here I was, suspended.  The prior screen elaborated more on the “names” policy and there was nothing to indicate any user conduct violations, as I’m actually pretty boring at times:) 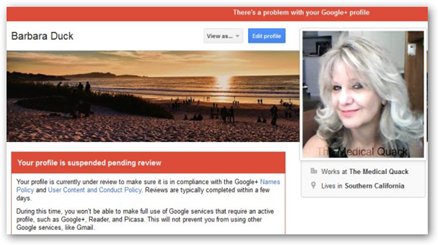 At the appeal screen Google asks you where on the web they could verify that this is who you really are so I have my blog hosted on Google’s Blogger platform and supplied that link as it has been there for over 4 years:)  The appeal screen also says you can scan a copy of your driver’s license to verify it is you but not going there of course as I also get a check from Google Ad Sense each month too and use many of their other services.  Now the dangerous part here and why I am bringing this up is to focus not only on the humor but to also make a point that during the time I was “suspended” and one of these crappy data mining services would have referenced me during that time, the person or entity seeing this who combines credible with non credible data (social networks) could have formed a not great impression of me.  If I were looking at credit, a car or whatever, that supplemental information that the scrapers provide could have sunk me and it can happen to you too.  This is why I recommend licensing the data sellers so as consumers we know who they are and what kind of data they sell and to who.  The profits made on selling data is in the billions and my same example I use all the time is Walgreen who made short of $800 million selling data only, so there’s whole lot of data moving around out there with huge profits by banks, companies, social networks you name it and after licensing, this is why we should tax them on a quarterly basis too.  I had to fix this on my own dime and so do you and it takes time and sometimes takes a long time to fix so until that is done as a consumer you are SOL.  During the presidential campaign “Barbara Duck” was good enough and must have not violated the Obama “Names policy”:)

Right now there are all kinds of privacy laws in the works but they will all fail unless a regulation arm is added and nobody’s doing it so again we need that to address data selling and making some money off of their huge profits in the billions.  This is part of the reason so many companies have so much in the bank, they sell data, data for nothing and the profits for free.

What if I would have had somebody like FICO who sells overstates analytics which we assume comes from social networks too as they won’t tell us what goes into the analytics process other than a credit report to created this whacked out non relational analytics service to tell if you are going to be a patient and take your medicine!  What if someone like them, and companies do it by the groves and would have seen my “suspended account”…well that old deadbeat won’t take her meds..as those folks score you and I would have lost points if it were a contributing item.  I use them an an example as I have never seen flagrant “Algo Duping” as bad as theirs and even consumers that are non tech caught that one and wrote it up all over places like the Daily Koz.

Anyway in this instance Google said I was correct in that Duck does meet their “Names Policy” and at this point I wonder how the Beavers and Crows and others are doing out there with this new parameter that I am assuming was added as Google is changing their algorithms all the time to keep the dirt out but sometimes like this time, the dirt was a real human duck!  So here’s the answer from Google, I am for real now and don’t have a “fake” name and my real name suffices so I don’t have to make up a fake name to be compliant:)  Maybe Google has some additional code to write to connect a few more of their entities so in the future they can have an “algorithm” do the work.  BD

Tuesday, January 08, 2013
My Commentaries , Need a Laugh , Other Items of Interest , Technology