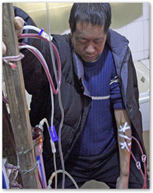 article as they did find out about him and it was still off limits with insurance even as the basic insurance only covers about half the cost and then other insurance or the patient has to pay the other half..sound like the same expense issues we have here.  In addition the nearest hospital is too far away and over crowded for him to be cared for there.  His  money ran out after 6 years to be cared for at the hospital   The poorest in China struggle for pay medical bills for serious conditions.  At the link at the bottom you can read the entire article and see more pictures as it appears his entire set up is in his bathroom.  He makes his own solutions and the cost for him with his homemade machine is only 12 percent of what he would pay at the hospital.  I sure hope things don’t get to this point here with healthcare.  BD

Three times a week, Hu Songwen sits on a small toilet in his home in a rural east China town and fires up his homemade dialysis machine.

Hu, who suffers from kidney disease, made it from kitchen utensils and old medical instruments after he could no long afford hospital fees.

He was a college student when he was diagnosed in 1993 with kidney disease, which means waste  products cannot be removed from his blood.

He underwent dialysis treatment in hospital but ran out of savings after six years. His solution was to create his own machine to slash his costs.

'The cost for each home treatment is only 60 yuan (£6), which is 12 per cent of the hospital charge for dialysis,' Hu said.

For the treatment, he inserts two tubes into his arm, which are connected to his dialysis machine. The blood is pumped out of his arm through one of the tubes, is filtered and then returned to his body via the other tube

This spontaneous movement of particles from a high to a low concentration through a membrane is known as diffusion.

The 'clean' blood is then pumped back into his body.

Although a Communist country, China does not have a cradle-to-grave free-at-the-point of use healthcare system.

Instead around half of the population buy basic medical insurance which covers for half the costs of their healthcare. The remainder is paid either by patients or their health insurer.

However, this leaves the poorest in China struggling to meet medical bills for serious conditions. http://www.dailymail.co.uk/health/article-2266412/Chinese-man-kept-alive-13-years-HOMEMADE-dialysis-machine.html