Home » My Commentaries » Other Items of Interest » Presidential Inaugural Ball–Ticketmaster Algorithms Blow It–Tickets on Sale Before Announced Sales Date– Any Companies, Markets, Etc. Know What They Are Doing Anymore With Models and Algorithms? Attack of the Killer Algorithms Chapter 51

Presidential Inaugural Ball–Ticketmaster Algorithms Blow It–Tickets on Sale Before Announced Sales Date– Any Companies, Markets, Etc. Know What They Are Doing Anymore With Models and Algorithms? Attack of the Killer Algorithms Chapter 51

Here we go again and it was that “computer glitch” attack or better yet those Algorithms. If you read this entire article, well guess

what, does Knight Capital ring a bell, same kind of stuff as they were “testing” their email system and yes we have a lot of disappointed people here for sure as those who did go online got tickets ahead of the announced time.  Not a good time to be testing but like the Knight situation some algorithms were running the show here that messed up so who did the programming?  I wouldn’t want to be that person.  Wait it gets worse, they don’t fix it and cancel the tickets to make it fair so those people who waited and received the algorithmically corrupted emails were out of luck completely.  This is why I made this the next entry in the Attack of the Killer Algorithms.  What do I keep saying about flawed data?  Here’s a bunch of it that denied access to those who were following the rules and they got screwed. 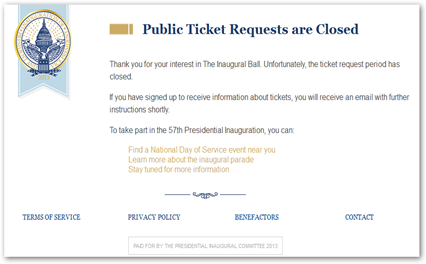 Sounds like things are even getting too complex at Ticketmaster so guess how it is elsewhere?  Same stuff with pushing and rushing and the programming and algorithms go ballistic once again.  If want to read the other chapters with some really primo examples of every day life occurrences, here’s the link to the links and some great vides that will explain how technology dupes you.

I had my own Killer Algorithm experience too with Google, out of the blue with my Google Plus Account told me that my name, Barbara Duck as it is all over the web and all throughout Google products did not meet the Google “name policies” and my account was suspended.  I had not even been on the social network in a couple of months.  If you were on Twitter yesterday you saw the whole thing play out.  I guess it was a Duck Algorithm:)  Here’s what I saw and tried to re-enter my name, but to no avail and being I have been established with Google and with many places on the web I was not going to scan my driver’s license and send it:)  So see how this stuff works…it was the algorithms and one day I’m impersonating a duck, according to those algos.  If you look at the image there it is. 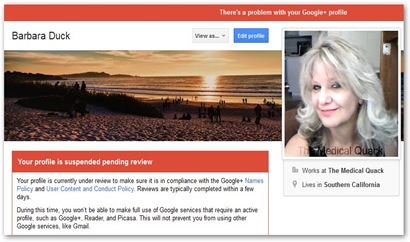 Now if any one of those shady data sellers were looking to profile me while this was in place, well guess what, I’m screwed and this is why you can’t take credible data and combine it with noncredible data as look what happens.  We do need those who sell data to be licensed (so we know who they are) and excise taxed as they make billions in profits.  You can’t address privacy without adding a model to identify and then excise tax these folks as they will screw you with “flawed data”, just like the folks wanting to attend the inauguration and won’t even make it right when their algorithms mess up.

Now that you have seen what Ticketmaster algorithms did, see what happens on Wall Street (video below) and how the technology takes advantage of you from a former Quant that worked there, you are AlgoDuped and they do it because they can and they too are not making right either, so they seem to have something in common here with not caring, no ethics and using “brains and math” no matter if affects people.  Sad state of affairs and the Attack of the Killer Algorithms just keep going and going and going and nobody is “really” responsible other than giving a little lip service.  Just be glad these were tickets and not stocks this time and remember insurers are bought and sold on the market and have their fair share of Quants who build algorithms and models too. BD

Inaugural planners announced last month that a limited number of ball tickets – they would not say how many – would be available to the public for $60 apiece, and they asked people who were interested to sign up on the official inaugural Web site. The committee was also selling tickets to the inaugural parade for $25 apiece.

The committee said tickets would become available this morning on a first-come, first-served basis.

But on Sunday evening, Ticketmaster, which was handling the sales, “experienced a technical error that inadvertently caused an e-mail to go out ahead of schedule,’’ said Addie Whisenant, a spokeswoman for the inaugural committee. Would-be purchasers were notified that tickets were available for sale. http://thecaucus.blogs.nytimes.com/2013/01/07/after-ticketmaster-glitch-inaugural-ball-and-parade-tickets-sell-out-early/

Monday, January 07, 2013
My Commentaries , Other Items of Interest