These are definitely interesting little critters but a study at Johns Hopkins say they work.  Hydrogen peroxide like bleach is a cleaner and same issues with being careful with the product.  Evidentially

these devices set off a fine mist that adheres to surfaces to do the cleaning.  Hospital acquired infections went down by 64 percent compared to rooms that were not treated.  That seems to be substantial.  They also lowered the risk of infection with drug-resistant enterococci by 80 percent.  The machines had their beginning in Singapore back during the SARS outbreak.  The animations in the video are great.  The two robots are not cheap at 40k for the two of them.  BD Both robots come together as they each have different functions.  Horsham, PA - January 2, 2013 - A new study conducted by infection control experts at Johns Hopkins Hospital demonstrates that patients admitted to hospital rooms decontaminated using Bioquell hydrogen peroxide vapor technology, rather than standard cleaning protocols, were significantly less likely to acquire multidrug-resistant organisms (MDROs), or so-called hospital superbugs. The study is published in this month’s issue of Clinical Infectious Diseases.

The Bioquell system consists of automated devices that disperse an Environmental Protection Agency (EPA)-registered sterilant into the air and onto surfaces and then convert the sterilant to a harmless state. “The findings indicate that Bioquell hydrogen peroxide vapo 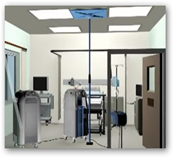 r disinfection should be implemented in high-risk environments to maximize patient safety,” said James Salkeld, head of healthcare at Bioquell. “Before this research, hospitals had legitimately asked whether they could afford the 90 minutes it takes to perform a Bioquell cycle. With the study showing acquisition being reduced by over 50% in patients admitted to decontaminated rooms, this begs a new question: can they afford not to?” Over 1,300 rooms were decontaminated using HPV during the course of the study, with no health and safety problems reported. The implementation of Bioquell’s advanced technology was also reported to be well accepted by unit staff. Bioquell, Inc. provided the robotic hydrogen peroxide vapor generators and supplies for the study, as part of the company’s commitment to support infection control research.   http://www.bioquell.com/news/johns-hopkins-study-shows-HPV-technology-reducuces-patient-risk/