Cerebral Aneurism surgery Can be performed with Catheters

We have all read about catheter surgery for the heart and now it is moving up to neurosurgery as well.  This is amazing how technology with surgical methodologies is going.  This surgery more than likely saved the patient from a fatal stroke.  Most of the time, aneurisms have no symptoms and are found usually when a patient is consulting for other health problems.

A few months ago I had the opportunity to talk about this minimally invasive type of surgery with endovascular surgeon from Yale University, again this was related to the heart, but the basic procedures of not cutting open an incision and using a catheter is somewhat the same in principle.

She was actually lucky as she had symptoms.  The patient spent one night in hospital and went home the next day with a band aid on her leg and returned to work in a day.  BD 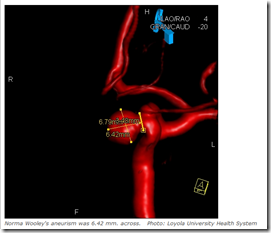 Norma Wooley checked into Loyola University Hospital on a recent Monday morning for brain surgery to repair a life-threatening aneurism (also: aneurysm).  She went home on Tuesday, cured of the slurred speech, drooping face and worst headache of her life.

Wooley had a cerebral aneurism, a weak spot in a blood vessel that balloons out and fills with blood. About six million Americans -- 1 in 50 people -- have brain aneurisms that could rupture. Each year, aneurisms burst in about 25,000 people, and most die or suffer permanent disabilities, according to the Brain Aneurysm Foundation.
Dr. John Whapham, assistant professor in the Departments of Neurology and Neurological Surgery, Loyola University Chicago Stritch School of Medicine, used a less-invasive technique that's becoming increasingly common in brain surgery; he inserted a catheter (thin tube) in an artery in Wooley's leg and guided it up to her brain. The catheter released tiny platinum coils into the bulging aneurism, effectively sealing it off.