The ViKY system was just approved by the FDA in December 2008 and the operating physician trained in France, where the robotic device is

manufactured.  The ViKY system is manufactured by Endocontrol Medical in La Tronche.

Before too much longer, minimally invasive procedures are going to become the standard.  Within the last year I have posted so many articles about these types of procedures and the doctors who do them along with the information about the manufacturer.  What I found particularly interesting here besides the amazing robotic holder itself was the speech recognition feature, wireless as you can see below.  The surgeon has both a foot peddle and wireless speech recognition to use.

This certainly saved the patient having a large incision as do most minimally invasive procedures.  The device is light and takes up no floor space.  It can also be used in gastrointestinal, urologic, thoracic and gynecologic regions.  The device ends up being the second pair of hands for the surgeon. 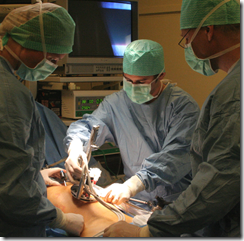 This month Fox Chase Cancer Center performed the world's first successful minimally invasive distal pancreatectomy using the ViKY® system's revolutionary robotic, compact laparoscope holder. The technology, developed in France and tested on thousands of patients in Europe, made its debut in a cancer setting in the United States this week at Fox Chase.

Typically with minimally invasive procedures, like a laparoscopic distal pancreatectomy, surgeons use both hands to manipulate the surgical tools and need an assistant to manipulate the endoscope—a thin, lighted tube equipped with a camera that allows the surgeon to view the surgical field. The ViKY system gave Gumbs precise control of the laparoscope while he performed the distal pancreatectomy. The endoscope moves according to the surgeon's orders, either through voice recognition or footswitch control.

Gumbs performed this first ever ViKY assisted minimally invasive distal pancreatectomy on a 65-year-old man who was diagnosed with two pancreatic cysts, one of which is potentially cancerous. Pathologists are currently evaluating

the cyst. "The new ViKY robotic laparoscope holder acts as an extra hand during surgery, giving me stability and steadiness," adds Gumbs. "The view of the surgical field is critical, so ViKY's pinpoint accuracy helps me perform more complex procedures laparoscopically." Unlike typical laparoscope holders, the ViKY system's holder is lightweight, easy to set up and use, and takes no floor space.