Home » Microsoft/Windows News » Other Items of Interest » Technology » The Right People, but Maybe in the Wrong Job

I thought perhaps I was the only one out here speaking out on this topic, but not so.  I have been referencing individuals with specific IT Technology experience and innovations for the most part, in other words get the person in the position that has actual “hands on” first hand experience and not just a figurehead that repeats what they are told from others.  We certainly don’t want another SEC embarrassing moment when the individuals in charge did not know what to do with the information that was offered, and unfortunately there’s a lot of that going on.  This looks to be a good move in the direction of Health IT with Dr. Blumenthal being appointed, someone who has been there and done that.

Also referenced here is the high level of developers at Microsoft and you could also pretty much say the same for Google too, with both companies using not only business intelligence but also making sure square pegs are not going into round holes and being extremely open to innovation, something that is making it’s way into healthcare today, and something that is a bit lagging, is the acceptance of such innovative business models, but it’s getting closer, we just need to ensure that the funds and money are there to keep the wheels of progress moving here so we can all benefit and realize teamwork through innovation is priority one.  BD

Wall Street and Healthcare – Was it the Mob or have the rest of us been operating like a PC with no anti-virus protection?

For years there has been much talk about the "war for talent." The idea was that talented people were a scarce resource for which companies had to compete. But hiring talented people is only half the battle. 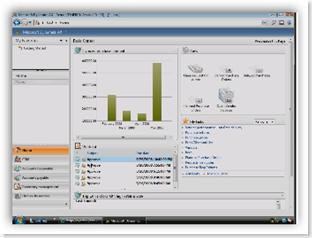 They must be given jobs in which they can be effective. If they are given the wrong jobs, with the wrong things to do, they will be square pegs in round holes no matter how much potential talent they have.

At Microsoft, the case is put still more strongly. The authors quote Nathan Myhrvold, the company's former chief scientist, as saying that "the top software developers are more productive than average software developers not by a factor of 10 times or 100 times, or even 1,000 times, but by 10,000 times."

That said, their argument is strong, and the idea that companies can benefit from preparing the right people for the right jobs seems timely.
As we look for ways to dig out of recession, it is worth remembering that effective people are any company's best weapon in the war, not for talent, but for survival.