I also read he couldn’t resist using Twitter from the hospital to let everyone know he was alive and well.  His website where you can follow his events and learn about healthy living is called LiveStrong and he can also be found on Facebook.  I have been fortunate enough to have a couple of my web quacks posted at the site in the recent past.  The Medical Quack is a fan and we hope to see him back in action soon.  He has literally had internal hardware now.  BD

"Surgery was tough, but went well," said Dr. Douglas Elenz, an orthopedic surgeon in Austin, Texas, who performed the three-hour procedure two days after Armstrong fractured his collarbone into four pieces during a race in Spain. 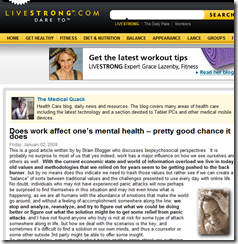 The multiple breaks "made treatment more challenging, but we're confident that the treatment performed today is going to be successful," he said.

Elenz said he used a 4- to 5-inch plate that he attached with 12 inch-long screws to stabilize the fractured bone.

Armstrong, 37, was to be released later in the day.

On a scale of one to 10 rating the difficulty of the operation, Elenz said he would pin it down at eight.

After his wound has healed, Armstrong will begin using an exercise bike to train his lower body, "but we won't let him do a whole lot with his upper extremities," Elenz said.

"After several weeks, we can take his training to the street, but we will need to take that day by day and week by week."