Many dogs get cancer too and this is a great story on how the drug is helping and as the article states, our friends are exposed to the same every day environments as us, so the animal can benefit and we develop more information on how the drug works and eventually it can be approved for human use as well.  The drug is similar to a Trojan Horse in the way it infiltrates and kills the cancer cells from inside.  All 4 dogs who have used the drug have had success with shrinking tumors and these were dogs that were unable to walk due to the placement of the tumor and now are back walking.

It has also been coined the NO-Cbl dog treatment, and with the way the drug functions they are hoping that FDA approval should not be too lengthy in the process at this is a B-12 vitamin based drug, when that point is reached.  BD

“The B12 acts as the Trojan horse, easily slipping into cancer cells. The subsequent release of toxic NO kills the cancer cells from within.” 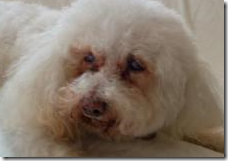 Oscar's recovery was extraordinary enough, but his case was unusual for another reason. Oscar is a Bichon Frise, who scientists reporting here today at the 237th National Meeting of the American Chemical Society call "the Miracle Dog." Joseph A. Bauer, Ph.D., and colleagues described promising results with a drug called nitrosylcobalamin (NO-Cbl) in battling cancer in Oscar and three other canines without any negative side effects. While it gives profound hope to dog owners, NO-Cbl also points to a powerful new cancer treatment for humans — one that infiltrates cancer cells like a biological Trojan horse.

Bauer put it this way: "The beauty of using a dog or a cat to test a cancer drug is two-fold. First, the animal can get the benefit of the most up-to-date drug in cancer medicine. Second, the NCI gets data on pets that are exposed to the same environmental factors their owners are. They breathe the same polluted air and drink the same polluted water that you and I do every day. If you can find an agent to treat cancer that occurs in a dog with success, there is a higher likelihood that you can take that to the human population and have a much higher response rate than with mice."

Tales of the 'Trojan horse drug' and the 'miracle dogs'