Home » Medically Related » Other Items of Interest » Technology » Could your Genome be hacked? “Beta” Hackers Gave it Try - see what they found out…

Could your Genome be hacked? “Beta” Hackers Gave it Try - see what they found out…

New Scientist came out with a story about how they wanted to see if they could in fact, get some stolen DNA information sequenced and analyzed. If you are interested in how the actual scenario took place, read it all through, very interesting and the fact that they were able to run the DNA through  Decode Genetics and why they chose them instead of 23andMe or Navigenics,

Some of the new laws that could be considered might involve making it against the law to extract DNA from a glass used in a restaurant for example.  That is part of what was the sample sent by this group for sequencing.

The interpretation is also something to be concerned with, as items can differ too.  A while back when I interviewed Dr. Milos, Chief Science Officer at Helicos, I asked the same question, and it is still at the same point today as it was 6 months ago, everybody is still doing a lot of talking about it, as there is no catch all answer here.  Soon, we could be living in a world of DNA hackers, as things always find their way to the underworld side of things, with more information floating around than we ever thought could exist.

On one hand, genomics is playing such an important role in research and development, hopefully allowing us to eventually find cures, but on the other hand we do have this side to be concerned about as well.  How far will the analysis go and could it affect whether or not couples are good candidates for having children, for one simple example, based on what is found, and who knows how the interpretations may vary.

This is definitely a big area of concern for Congress who will be responsible for laws that guarantee our privacy and I hope they understand the entire process, and perhaps a few members might be sequenced themselves, so they understand what it is all about and are able to have some first hand knowledge when it comes to creating new laws on privacy and genomics.  When I watched the Senate testimonies on medical records and saw how little was known by the membership on that item, frankly it worried me as this is a consumer or human matter that entails everyone with their health, one of the reasons I talk about teamwork and first hand experience being a part of decision making processes.  We do have some laws in place, but do and will they be enough in the next year or two as this is moving an an accelerated rate of growth.

On the software page link below, you can explore and see some public samples of individuals who have made their results public and what they found out and potentially how it might or might not change how they think and possibly make future decisions with the new found knowledge.  Check out Dr. Halamka from Harvard, the CIO of Beth Israel Hospital, he’s there with his sequencing listing as public information and has talked about his interpretation on his blog too.

This is probably not something the average person may try at home, but a pretty tech savvy individual could do a number on it, just like the story was told here.  The related reading below has some links to others who have been sequenced and they write about their reactions, thoughts, etc, good reading to learn up with.  BD

You might have thought that genome hacking requires specialist skills, and personal access to sophisticated equipment. But in recent years, some companies have started to offer personal genome scans to the public over the internet. Other firms routinely analyze genomes on behalf of scientists involved in human genetics research. In theory, both types of service are vulnerable to abuse by a genome hacker determined to submit someone else's DNA for covert analysis.

Until our investigation, it was not clear whether this would be possible in practice. Could a hacker with no access to a genetics lab 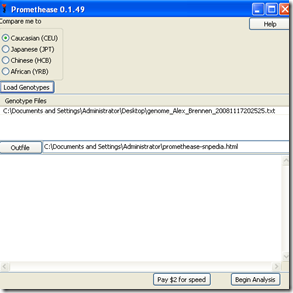 take an item carrying another person's DNA and obtain a sample that companies would accept for scanning? Would the sample be of high enough quality to yield accurate results? And would genome analysis companies have procedures in place to identify and refuse suspicious orders?

So what would a hacker who had taken Peter's DNA have learned about him? For the DNA taken from the drinking glass, Promethease highlighted a range of SNPs, including those conferring increased risks of baldness, the skin disease psoriasis, and a form of blindness called exfoliation glaucoma. Decode's interpretation of the semen sample was rather different. For instance, it decided from an analysis of eight different SNPs that Peter's risk of developing psoriasis is very low (see table). And while Promethease and Decode both concluded that Peter is more likely than a typical person to develop Alzheimer's disease, they disagreed on the size of his risk (see "A short-lived Alzheimer's scare").

This is the free and open source software used to read up, once they had the sequencing done to build a report on the SNPs, (Single Nucleotide Polymorphism).  I think overall it was probably a good wake up call for all and gives items related to DNA security something to think about, as these folks were in essence the “Beta” guys giving it a run to hack.  BD

Promethease Software to Use for Interpretation

Promethease is a tool to build a report based on SNPedia and a file of genotypes. Customers of testing services (23andMe, deCODEme, Navigenics, ...)

can use it to learn more about their DNA. It can also pool the data from multiple testing services. The program runs for approximately 2 hours. If you make an optional $2 payment via Amazon.com the runtime is reduced to approximately 5 minutes.

A Single Nucleotide Polymorphism is also known as a SNP or snp (pronounced 'snip'). [These and other terms are briefly defined in our Glossary page.]

The importance of SNPs comes from their ability to influence disease risk, drug efficacy and side-effects, tell you about your ancestry, and predict aspects of how you look and even act. SNPs are probably the most important category of genetic changes influencing common diseases. And in terms of common diseases, 9 of the top 10 leading causes of death have a genetic component and thus most likely one or more SNPs influencing your risk.

There’s No Good Reason to Delay Data Liquidity and Information Sharing in Healthcare..

St. Joseph to Subsidize physicians with EHR - up to 85% of the cost – TouchWorks from Allscripts

Steven Pinker, Harvard Professor of Psychology talks about his genome, what he found out, what he learned, and how the psychological interpretations are somewhat still up for discussion