Fortune 100 Companies Don't Get Twitter Study Says and I Agree

This is a good study I think as a user of Twitter I can clearly say those without any personality don’t get the reads.  You can pretty much tell the stale and stuffy ones out there as they don’t understand how Twitter works, it’s not like putting an ad online, this is interactive.  Best Buy uses it for customer service.

You know I have to say it’s difficult for me to explain how valuable Twitter is for efficiency and getting information to those who never even got to RSS feeds, and there’s a ton of folks there who don’t know what they are.  I see a lot of healthcare folks on here and we somewhat all get acquainted at some point in time to a degree and the new lists have expanded on that a bit more, even though I have been slow in making up a good list, I started one but need to go back and create another one when I have time.

Perfection Social Networks – NOT – but we all live with it and I do have to say Twitter is getting better all the time compared to the early days.  We like the convenience and efficiency and live with it since it is social communications and it’s usually fixed pretty quickly when there are issues.  BD 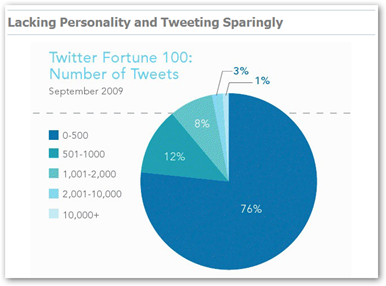 In August we reported that a large number of Fortune 100 companies have embraced Twitter, but how well are they actually using it? A study released today (PDF) by Weber Shandwick says the answer is not very well, and that the majority of Fortune 100 companies don’t really get Twitter. Though 73 of 100 companies had at least one registered Twitter account (up from 54 reported in an unrelated study released in August), the majority of them weren’t using Twitter effectively to engage their followers, weren’t tweeting often, and didn’t display any personality in their tweets, according to the study. 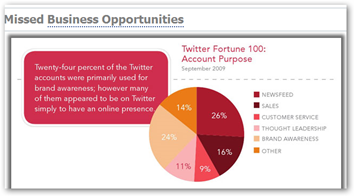 The majority of the accounts from Fortune 100 companies had no personality, but instead focused on brand only. Out of the 540 accounts, 53 percent “did not display personality, tone or voice on their account pages,” according to the report, which judged personality based on whether an account was identified with a personality who posted on behalf of the company or if it was a “faceless” brand account.