The patient had a very severe case of the Swine Flu and with moving the patient around in this special bed versus laying on her back, she was able to recover, but it was a slow process and she remained in the bed for 8 days.  A patient needs to be between 88 and 350 pounds to use the bed according to the specifications.   By placing here in the bed face down and rocking, it relieved the pressure on her lungs to allow her to recover.

Those who treated the patient said the bed made the difference, otherwise she may not have survived as her temperature was over 106.  BD

Megan Dillon thought she'd recover from flu symptoms with a little rest last month, just like everyone else in her Webster household. 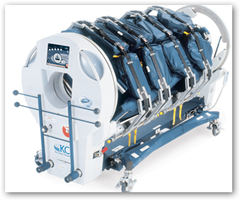 But days in bed only made her worse, and she ended up in the emergency room at Christus St. John Hospital in nearby Nassau Bay.

A rapid H1N1 swine flu test was negative. Uninsured and determined to avoid a hospital stay that Saturday in mid-October, Dillon was released with two prescriptions for suspected pneumonia.

All the while she rocked — face down — on the RotoProne. It's made by KCI, a San Antonio medical products company. The bed costs $1,295 a day for the first 10 days then drops to a $395 daily rate. Mainland Medical Center as well as Memorial Hermann's Texas Medical Center and Memorial City locations are among the area hospitals that use the device.

Contraptions to turn patients in respiratory failure upside down have been around for at least a decade. Doctors have been leaving patients on their bellies to improve lung function for much longer.