Home » Medically Related » My Commentaries » Technology » EHR Vendors to Focus on Usability? What a Surprise, Many Systems Have Done This For Years, EHR Systems Owned By Insurers Though Might Be Subject to Different Flavors and Goals

EHR Vendors to Focus on Usability? What a Surprise, Many Systems Have Done This For Years, EHR Systems Owned By Insurers Though Might Be Subject to Different Flavors and Goals

I go back to the pre ONC days when I was developing.  Did I focus on usability, you bet I did.  In those days everything had not yet

moved to the web but your number one client is the user, the doctor.  With integration I can see how some of this was los in the translation and there have been numerous articles on the web on how this was lost beside me talking about it.  I really liked the idea of the Common User Interface, so when you talk about the #1 client, is it not  a good idea to have the same or similar interface so doctors can feel at ease and immediately recognize work flows screens anywhere they go?

Of course it was a good idea and I even consumer/patients I chatted with on Twitter say the same thing, so I pointed them to the “lost” project of the Common User Interface that hardly anyone outside the NHS and a couple other small developers used.   NHS had a lot of good developers in there and it was all open source..tada! 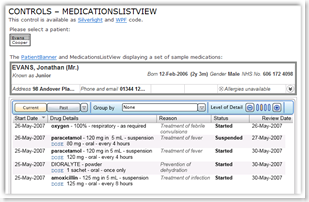 It was kind of funny though when I pointed the patient/consumers over to this site as they scratched their heads too as here they got to see “their” idea too, just sitting there so they too recognized we had a little shortage in the collaboration department.  I ran around HIMSS in 2008 with the demo on a tablet and it was funny as all the EHR vendors were asking me “who’s system is that”, of course nobody wanting to be missing anything there with a potential new system, was funny:)  So when it come to safely on medical records, most vendor have done their homework as far as design, etc.  Again the only ones who may have lost some focus here as I see it are the ones owned by insurance companies as money and algorithms for profit is what drives their business.

I posted this back in 2008 about a doctor/developer I knew in New Zealand and his work.  He emulated it and didn’t use the Code-Plex language either, so how hard was that?  Personally I think all the safety talk is being way overdone and again most EHR companies that I have seen owned by doctors never lost the focus of the doctor being the #1 client.  Come on folks these are just the screens that run the processes which now are at the back end a change from when I wrote and had to put embedded code in the forms, easier now.

Electronic health records (EHRs) have to be usable and useful by physicians and integrate with hospitals’ or practices’ other systems to benefit providers or else the money spent on them is just wasted.  I feel I have to rub a little salt here and gee look at how the Common User Interface even works with HealthVault, the PHR, but very few listened.  Sure I’m giving Microsoft credit here as it should be as they had this one right.  Let’s dig this presentation out of the coffers here and see where this was in 2009, ahead of it’s time.  I am making a point here that those companies without ties to payers have long had this interest and projects out there, just nobody listened.  The presentation below was done in the UK and discusses both platforms.

So at this point maybe we should be saying “gee I could have had a V8” if you remember that old television commercial. Sure it had Silverlight but you replace it with HTML5 and off you go and write some new code and change out modules.  See even I could do a demonstration easily enough, from the 2008 archives again so keep in mind this was almost 5 years ago.  So there’s my rant today on wasted efforts that could have made a difference from years ago and it’s funny we are somewhat back on the very same idea today when talking the National Institute of Technology with framework, duh?  Maybe money and greed won’t take over this time.  BD

EHRs were widely adopted, there wasn’t a demand for usability, according to David Blumenthal, MD, former national health IT coordinator and current president and CEO of The Commonwealth Fund. The National Institute of Standards and Technology (NIST) is developing a framework to think about the use of EHRs in relation to adverse events and patient safety. Lana Lowry, NIST project lead on usability and human factors for health IT, believes that in addition to a set of technical requirements for functionality, systems need to have the same set of user requirements for how a user performs with the system. http://www.govhealthit.com/news/ehr-vendors-focusing-usability
Tuesday, February 12, 2013
Medically Related , My Commentaries , Technology