Telus has now become the largest EMR vendor in Canada with this acquisition.  They have around 9,000 physicians out of the 50k market of Canadian doctors.  Back in 2010 Telus also licensed the Microsoft Health Vault Platform for personal health records.

What is interesting is to look at this chart to see where both the US and Canada stand compared to other countries and granted both countries have a much larger population than other countries where EMRs are around 90% use. 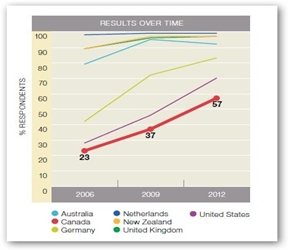 The acquisition, which is due to close March 4, will more than double the number of Canadian doctors using Telus Health’s EMR service and give Telus more than 50 per cent of the market share among doctors who use electronic health records instead of paper charts.

Financial details of the acquisition of MD Practice Software LP, a member of the MD Physician Services Group and a subsidiary of the Canadian Medical Association, were not released.  The announcement is the third EMR acquisition for Telus Health, building on earlier acquisitions of the British Columbia-based Wolf Medical Systems and Quebec’s KinLogix. http://blogs.vancouversun.com/2013/02/26/telus-health-acquires-ontarios-largest-electronic-medical-records-company/