If you have ever billed the 99213 is the standard office visit, not extended and what you see on most family practice doctor bills.  Many have been afraid of billing legally for the 99214 and 99215 when they have

spent the time, not wanting a delay in processing claims with attaching paperwork required, like an HPI or ROS.  Palmetto, the Blue Cross subsidiary Medicare contractor will be instituting the audit procedure on the West Coast and in the Mid Atlantic region.  Electronic medical records of course have made it easier than sending documentation from a paper chart.  All of this controversy about billing began back when HHS and the DOJ sent letters out with nothing in hand accusing doctors and hospitals of “cheating” the system.  Folks like myself and others on the web scratched out heads as we know billing improved with medical records when this came out and I don’t know why the same thoughts didn’t sink in at that end.  I never did understand how they sucked in Eric Holder on the letter either or why.

Sure there is fraud mixed in there too and they need to be caught but for the most part doctors are not cheating.  I don’t know why we don’t hear anything about the billing at HCA who has bragging about their billing be attributed to their big profits? Palmetto will be looking for patterns or those who bill at higher codes more frequently than average.  Again I used to show doctors how to use the higher codes to substantiate their visits when they did the work and spent the time and to send it in. The AMA article also reflects the same thing that the fear of being audited will keep many from billing for actual time spent with sticking with a 99213 code.  So much of the time I see such a back and forth effort for amounts of money that are too small to squabble about too, so they end up swapping spit on some of this type of activity.  When I was in logistics we had coding too for items being shipped but a quick drop on the scale was all we needed there for those who lied about package weights and densities and it’s a little more complex here for sure.

It will be interesting to see what amount this turns up as Palmetto gave a short chart on what 99214 reviews looked like over a 3 month period.  California knows how to code and bill on 99214 as you can see 18% were rejected and it’s possible too that some of those are also being disputed at a higher level. 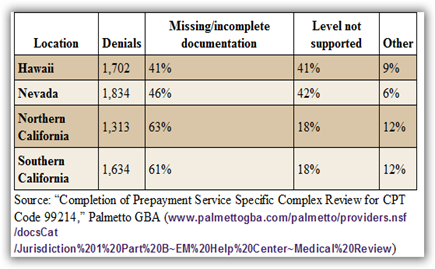 I just think that with the unexpected increase in reimbursements someone had to show someone they were doing something and at least we are not having to hear about anymore Facebook HHS contests:)  BD

Medicare administrative contractors have instituted reviews of claims for the services by requiring physicians to submit supporting documentation before payment is issued. Prepayment audits are targeting primary care physicians and specialists whom the Medicare payers have singled out for aberrant billing and coding practices. The contractors seek to ensure that proper payment is issued for the services provided — and not to burden the physicians who are billing the program correctly, officials said. Palmetto oversees the Medicare hospital and physician benefits in seven states on the West Coast and along the mid-Atlantic coast. On Jan. 10, the contractor announced the launch of prepayment reviews of high-intensity new patient office visits billed by certain specialties in California, Hawaii and Nevada. Physicians in North Carolina, South Carolina, Virginia and West Virginia also had subsequent hospital care E&M services reviewed on a prepayment basis beginning in September 2012. Similar reviews by other Medicare payers also target office visits. First Coast Service Options, the contractor for Florida, has instituted a 100% prepayment edit for billing the established patient E&M visit (CPT code 99215) by general, optometry, osteopathic manipulative medicine, pediatric and podiatry practices beginning Jan. 18. Every claim must have documentation to support the medical necessity for that level of service, the contractor stated on its website. http://www.ama-assn.org/amednews/2013/02/04/gvsb0204.htm