Home » Insurance » Medically Related » My Commentaries » HHS Delays Basic Health Option Until 2015: Translation Is We Didn’t Have Enough Time to Set Up the IT Infrastructure to Support It–Takes Time to Write All This Code–More Executives/Politicians Need Improved Digital Literacy

HHS Delays Basic Health Option Until 2015: Translation Is We Didn’t Have Enough Time to Set Up the IT Infrastructure to Support It–Takes Time to Write All This Code–More Executives/Politicians Need Improved Digital Literacy

in the news, as just yesterday I posted the link below telling everyone to “hurry up”.  Digital illiteracy and not being on the same path and lack of comprehension as to what brings this all together shows it’s illiterate face all the time.  A lot of why this happens is due to those calling for the “’rush” in actuality are “non participants” themselves, otherwise they would get a clue and understand a little better:)  Also, my observation, those that come out with statements wanting a “rush” also subscribe to the idea that all of this is “for those guys over there” paradigm.  I’ve written about this for the last 3 years and still it appears in the press.  Bloomberg made a great comment on this fact too in saying “read the papers and you won’t find it there” during the NYC Celebration of Health conference today.  He gets it and I’m still waiting to see if he’s registered in Code Academy yet as he said he would:)  He might need to wait until he’s out of office as he’s very busy.

Again what do you do when you want to “rush” the

processes, chain the programmers and developers to the desk and stand there with a whip and chain?  Again, digital literacy with executives that understand the process is really helpful.  There are others in government departments that make digital illiterate statements in the press, like Homeland Security Chief Napolitano saying she doesn’t use email.  She just gave a ton of consumers the incentive to opt out of technology and she didn’t even realize what she did, not smart.  From my angle we go back to “its for those guys over there” as if she were a real participant, she wouldn’t have said that:)  Sure we all have problems and to 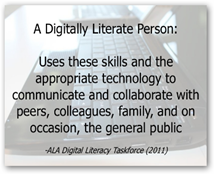 say that she doesn’t even use a web based email program for casual personal use, well you get the picture…she’s hanging on to old paradigms and using it as an excuse not to be a bigger participant herself.  Again like Bloomberg said, look for nonsense as reported in the papers sometimes and that comment was utter nonsense on her part.  Its said she had no clue on how she made herself look at all in tech just shook their heads and, well there’s another one of those with loose lips:)

Take a look and watch the 5 videos on the left hand side of this blog when you have time and it will change the way you see the world and the US and learn how we have the bad side out there too making money off of digital illiteracy too. As the one video says from Cathy O”Neil, “our brains are the tools and we are smarter than you” and they use them in finance and in financial healthcare areas and we end up with what I have called “The Attack of the Killer Algorithms” with a bliss administration at times.  The link below has a great video with big companies including Ford and NASA looking for value and as the gal from T-Mobile says “what we are doing is silly” and lack of integrity and value in data leads to algorithmic attacks on consumers.

Bridging the Digital Divide: It's more than teaching computer skills to seniors from Bobbi Newman

So now maybe I added a couple points here as to “why” the basic plan has been stalled off, we don’t have the code and infrastructure done yet.  Again, if you don’t think IT infrastructure is needed for all laws and processes anymore, think again and don’t be bliss, as algorithms have teeth and they bit consumers every day, again as that level at the top knows how to use them to make money and they don’t care how it affects the every day person on the street.   You can watch the same videos at this page where I talk about “Algo Duping” a coin that has been appreciated by a few college professors along the way.

Coming back to the topic here, the real reason is computer code and system that need to be developed for holding off on the basic plan.  If folks at the top were just a little more explicit in describing this and a lot less bliss, it would help as I call it “education” and you can’t hurry the processes so next time you read that in the papers, ignore those who want all of this done faster as they don’t understand IT processes and such articles will just frustrate you and put you down the wrong emotional path of yet one more OMG story that will make you frustrated or angry with only brushing over the top.  BD

The Obama administration has delayed by one year the rollout of a health program aimed at low to moderate-income people who won’t qualify for the expanded Medicaid program under the federal health law.
Under the so-called Basic Health Program, some states had planned to offer government insurance to people who don’t qualify for Medicaid, but who would be hard pressed — even with federal subsidies — to afford the premiums and cost-sharing of plans offered in the new insurance marketplaces. Those earning up to twice the federal poverty level, or about $47,000 for a family of four, would have been eligible.
The Department of Health and Human Services on Wednesday said it basically ran out of time to put out guidelines to get the program running by 2014.
“HHS expects to issue proposed rules regarding the Basic Health Program for comment in 2013 and final guidance in 2014, so that the program will be operational beginning in 2015 for states interested in pursuing this option.” http://capsules.kaiserhealthnews.org/index.php/2013/02/hhs-delays-basic-health-plan-option-until-2015/?utm_source=feedburner&utm_medium=feed&utm_campaign=Feed:+Capsules-TheKhnBlog+%28Capsules+-+The+KHN+Blog%29&utm_content=Google+Reader
Thursday, February 07, 2013
Insurance , Medically Related , My Commentaries