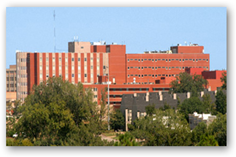 hospital will have to close.  That also means residents and medical students would have to go elsewhere and something the state does not need to lose more doctors.  They are like all other hospitals with seeing and treating more uninsured and under insured patients.  Here’s one in New York that will be closing, same issue money, money and money.  So when one hospital closes other have to take up the slack.  Where are the billions that IBM and other Health IT companies going to come from?  I’m just asking with hopefully adding a question of reality here.

The hospital has funding issues and has had to put money out on improvements to keep the hospital in safe operating condition.  The article says that some of the beds are so bad and old that even the federal government wouldn’t take them.  Private philanthropy has chipped in a bit.  This is a teaching hospital too.  If the hospital can’t make the necessary updates then we have an accreditation issue that would appear next.   They reference what happened here in Los Angeles when Martin Luther King Center was closed, another hospital 32 miles away was hit with the additional patient load and had to downgrade their ER and two other hospitals financially impacted had to close. So where are the billions required for keep up to standards with Health IT going to come from?  Granted all hospitals are not broke but if you look around with maybe  the exception of HCA who boasts that their billing processes have helped them and who is now under investigation for excess stenting for money,  it’s not looking real good.   Even last year, hospitals known throughout the world like Cedars Sinai closed their Psychiatry services, again to save money.  BD

If the Oklahoma State University Medical Center in downtown Tulsa does not receive an adequate level of funding from the Legislature this session, then the hospital will have to close. If it receives only an inadequate amount, services will have to be drastically reduced.
If the hospital were to close, the residents and medical students training at the OSU Center for Health Sciences' College of Osteopathic Medicine would face an uncertain future - and maybe no future at all in Oklahoma. And the remaining Tulsa hospitals would face a huge influx of new patients, many of them uninsured. It was just a half-decade ago when the hospital was last on the brink of closure, leaving many of the OSU medical school's residency programs in limbo, and thousands of patients wondering where - or if - they'd receive care. In addition to an annual operating subsidy, the medical center also needs about $19 million in one-time funding for such capital improvements as a parking garage, heating and air-conditioning system improvements, other repairs and maintenance, and implementation of an electronic health records system. If you don't believe it, consider the case of the Martin Luther King Jr.-Harbor Hospital in Los Angeles, which was closed in 2007 after years of major problems. Rafferty was a federal regulator at the time and had recommended the closure. "When we closed it, another hospital 32 miles away that was hit by the extra patient load had to downgrade its ER, and two other hospitals that were severely impacted had to close," she recalled. http://www.tulsaworld.com/opinion/article.aspx?subjectid=211&articleid=20130210_211_G1_CUTLIN422671&allcom=1
Sunday, February 10, 2013
Insurance , Medically Related , My Commentaries , Other Items of Interest