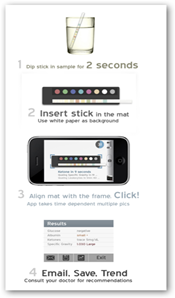 This was shown at the TED conference in Long Beach and looks to be quite useful and no you don’t pee on your phone.  The app is being tested at a hospital in India and was developed by an MIT graduate.  It uses time lapsed images to read the dip stick.  You do have to pee in a container and dip for the app to work.  This might be one of those apps if used in the US for the FDA to take a look at for a stamp of approval.  If you look at the images it looks pretty straight forward with a matt and you place on top of the phone.  So far in all tests is has come out being more accurate than just reading the colors on a testing stick.  It will be available soon at the Apple App store.  It also has not web connection to report data so you are in control here if you want to send the results on to your doctor.  BD

LONG BEACH, California – For entrepreneur Myshkin Ingawale the logic was unassailable. Everybody pees. And everyone has a cellphone. “There has to be something going on there,” Ingawale told a chuckling crowd at the TED conference. 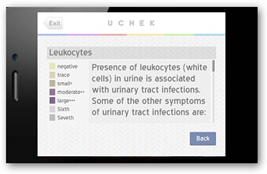 Mumbai-based Ingawale, that something is using the increasingly powerful camera and processing muscle packed in smartphones to run cheap, accurate urinalysis tests. Don’t worry, it doesn’t involved soaking your precious handset, though it does involve peeing in a cup. While it’s being tested in a Mumbai hospital, the app is wending its way through the Apple approval process. Ingawale is optimistic it will be made available to iOS users soon. An Android version is also in the works, though because of all the different cameras in use on all the different Android-flavored phones it will take a bit more time to roll out, he says. http://www.wired.com/business/2013/02/smartphone-becomes-smart-lab/