Update:  Since I posted the original additional information, Huffington Post states that WellPoint will be selling the software analytics.  “WellPoint itself is already using the insurance application in Indiana, Kentucky, Ohio and Wisconsin. It will be selling both applications – at prices still to be negotiated – and will compensate IBM under a contract between the two companies, an IBM spokeswoman said.” Original Post: This is pretty good and the clinical search looks be

very cool.  With the computing power that Watson has, this is great.  This is a model case to where the insurer does cover the treatment and all goes just fine. Ok so let’s go to the next scenario and this will happen in real life as to when the doctor’s choice for care is not approved…lot of work to be done there as it always is with payers.  Will a hospital administrator get involved at that point?  Will a mortality risk be purchased for review relative to the patient?  Those are just questions and a lot of this goes on already. From the clinical side though it looks great and the ability to use speech recognition to enter notes all enclosed is super.  The partnership was announced in March of 2012 and this where they are with the work.

Also Watson has been enrolled at Cedars Sinai in Los Angeles and again with WellPoint bankrolling the cost here here and they are doing some similar testing with the approval processes.  Cleveland Clinic is also teaching the Watson  technology some new language as well.

Now as I mentioned above, what about when it comes time to get approval?  This is part of what is being tested here too. 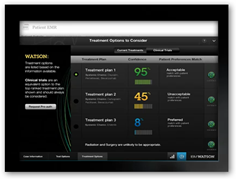 Keep in mind that Watson is machine learning so what you give it to reference is extremely important.  This is machine learning so at some point you are getting to the “unreadable” levels with data and technologies compiling. Too bad our government can’t see this as a tool to make better laws and learn how to model better yes I know I have written about that several times and we have Citibank using Watson too kicking the government in the back side too with financial analytics.  We end up as consumers being victims of the Killer Algorithms right and left and they can’t see it.  Anyway back on course here the link below states how you don’t rush this either and have to be careful and thorough and I know HHS wants everything now but they have to wait as coders can’t work any faster.

The next video goes into more detail with how a cancer patient would be treated and you can watch the work flow.  On both videos watch the tight integration with the electronic medical records system.

It’s all in the EHR medical record mining.  Here’s the explanation video of the program as it began.  Again as long

as hospital administrators don’t  interfere too much in the payment and budget side and with high cost cases it will open those doors and one would have to be oblivious to not see this as analytics are overburdening us today in one form or another.  Payers have transitioned much of the work flow in EMRs today so let’s hope in this case it stays pure and remains a good tool for doctors when they need it.  BD

IBM has taken a major step forward with partners Memorial Sloan Kettering and WellPoint in putting IBM Watson to work in healthcare. On Friday, February 8th, the team unveiled the first commercially-developed Watson-based breakthroughs. These innovations have the potential to help transform the quality and speed of care — and the entire healthcare industry — through individualized evidence-based medicine.