This is a good move as the Consumer Watchdog kicks butt to put it mildly and has some great talent on board.  In addition many

celebrities donate to their cause such as Barbara Streisand so we can say thanks there for sure.  They do their work and there might be a mathematician or someone on board with some data science or quant experience too.  If not in house they go get it.  The Consumer Watchdog is accusing WellPoint of padding it’s profits.  Here’s some past links relative to the activities of the Consumer Watchdog.  The first link here goes back to 2010.

In 2011 they suggested the two agencies in California that watch over insurance companies should merge, which is really a good idea.  They have warned the Feds too in the past.  Again they get with it and according to this story the insurance folks are not too happy about the Watchdog being on the case, as they work and have saved Californians millions.

The link above relates to the Watchdog stating to watch insurers on the MLR numbers too.  I wonder if the consumer Master Card and Visa debit and charge card records they bought to scan and see who’s buying clothes a size larger comes under MLR expenses.  If you have not seen the input on that one, check it out at the link below as you wonder how much data do they need and what is really the value and is this more of a big brother type of data scan.  Insurance companies spend and make a lot of money selling data and creating new analytics guidances all the time and I don’t know how far into the non linear areas they are reaching but again how much data do they really need when it comes to spending money buying our debit and charge card records?  I’m sure the Watchdog might look into that as well.

As we recently heard there’s only going to be one choice for small businesses with buying via exchanges and the insurers have over 100 of their own insurance exchanges they have created too, so competition here?  More choice were slated to be available by 2015.  Then the House formally requests why this is happening and it’s IT infrastructure build and time as well as having the information to include from insurers, so go wail over there on that part.  I’m sure I’m not alone but I would really love a chance to explain just some very basics to Congress on how “the short order code kitchen burned down years ago”…and to some others…”you can’t hurry the coding and programming processes”…

Small Business Insurance Options for Health Insurance Provisions Delayed–It’s the IT Infrastructure Of Course But House Questioned Why…Post No Code Before It’s Time:)

Here’s the latest from the Consumer Watchdog site…with their announcement.

The state gave out grants for the research and the Watchdog along with another group the California Public Interest Research Group is also in on the game to review.  Oddly  these were the only two agencies that applied for the grant work so what kind of message does one get from that?  BD

But this time Jones got some help from a surprising source. He has quietly tapped Consumer Watchdog, his political ally and the state's most outspoken industry critic, to help review health insurance rate increases under a one-year contract worth as much as $88,000. 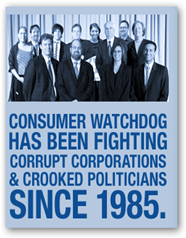 Patrick Johnston, president of the insurance trade group California Assn. of Health Plans, said, "Any review of health plan rates should be conducted by independent, impartial consumer groups that do not have political conflicts of interest and financial motivations."

Consumer Watchdog was hired to supplement the state Insurance Department's own review of rates.  Jamie Court, president of Consumer Watchdog, said the group's proven track record in challenging insurance company practices made it an ideal choice for the state. Consumer Watchdog says it has saved Californians $2.3 billion since 2003 by successfully disputing rate hikes for property and casualty insurance under Proposition 103, the 1988 ballot measure the group championed.