In order to survive the current economy we keep seeing hospital affiliations and ownerships in the news and today we have one more in Phoenix.  I grew up like next door to John C. Lincoln and watch it grow from a single small hospital to the large medical center they have today. 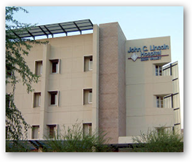 With their system affiliating with Scottsdale they will have a total of 5 hospitals in the new network.  Smaller hospitals all over the US are competing with the large for profit hospital chains across the US.

According to the article this has been discussed several times and it comes back to working to keep costs down through accountable care organizations.  In other words they are doing everything they can to keep costs down while consumers accessing healthcare continues to dwindle down as it is becoming non affordable for many.  No word yet on which CEO will remain at the top.  Take a look at Texas in a related story with St. Luke’s hospital affiliating with Catholic Health Initiatives in Denver.  More history at the links below with details on the Private Equity portions of some of the consolidation and purchases with Catholic Hospitals.  Ascension if you remember renewed their contract with Accretive, the 3rd party analytics company what was banned from practicing in Minnesota due to their collection and other practices which were deemed not ethical as the company was working to create models to finance some non profit hospitals who were having some extreme dollar issues.  When looking for money and trying to stay open had an impact on how actual patient records ended up on Wall Street with trying to secure additional investors…a bad side effect of folks trying “anything” and “everything” to model a reason to gain investors.

Catholic Healthcare groups are growing and again some of the competition that smaller hospitals such as Lincoln and Scottsdale face with competition.  It’s all about money and I’m sure there will be even more stories as such as hospitals wrangle and figure out how to try to keep costs down and keep doors open.  BD

hat will include five hospitals and facilities across Phoenix and Scottsdale.

The boards of both non-profit health-care organizations this week approved a letter of intent that will trigger exclusive negotiations through July 31 to hash out details of the affiliation agreement.

The combined entity would be called Scottsdale Lincoln Health Network, with about 10,500 employees, more than 3,500 physicians and five hospitals from Sunnyslope to north Scottsdale