Home » Insurance » My Commentaries » Need a Laugh » JOBS Act Turns a Year Old–Big Companies are Figuring Out How to Model It to Make Money, Minimal Success So Far For Small Business

JOBS Act Turns a Year Old–Big Companies are Figuring Out How to Model It to Make Money, Minimal Success So Far For Small Business

This article from the Atlantic does a pretty good job with detailing a series of events that has taken place to include in their opinion that it’s not doing much and when you look at what they present, it’s kind of hard to argue. Fewer IPOs are taking place for one. No matter what the government

does for small businesses there’s corporate USA and the banks with models to figure out how to cash in. Sure there might be some small businesses that have been able to jump in in a small way, but not a lot more than that. It’s just like anything else out there with a law that has way too many loopholes in it, the banks and big corporations figure out how to make it work for them.

Part of the issues at hand is the cost for creating models which small businesses don’t have or can’t afford.  It’s kind of interesting as there were of course good intentions here by all means and backed by the VC groups but they are getting outsmarted by the banks.  Goldman Sachs figured out how to use it.  Goldman Sachs Liberty Harbor Capital is a new company they created to invest in risky high yielding small US companies.  It means they get to do more behind closed doors with this effort basically. They are not alone as other “shell” companies are emerging as well.  Wonder what we will see in healthcare with the so called shells?  Goldman's new company won’t have to submit to an audit for five years and a lot can happen in that time too.

The crowdfunding portion of the law is moving along like a snail and this is really where the opportunities lie for small businesses.   Big investment firms and Hedge funds will now get to advertise…big deal for main street.  I guess no matter how you build the models and algorithms, if the money is not there, it’s not going to fly well, unless you are a big conglomerate that already has plenty of money.  Here’s what’s going on in the medical device business 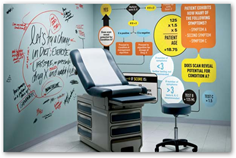 , more jobs going over seas and again we have that “insane” intangible value problem with over valuation of software, algorithms and so on.  The big company modelers will be there to “out model” the small businesses for sure.  It’s just too bad that the legal folks in this country don’t bring on some technologists when they write laws today, they should be their partners for sure.  Legal and technology fields should work together as b now I should guess that the legal beagles might have learned they are no match for a technologists that models.  Here’s a good article that talks about algorithms in medicine where “common sense” is also discussed.

That is so much of the issues we have today as some models have some fiction built in and nobody verifies their accuracy.  If you scroll down and watch the 4 videos in the footer here, you will get a better understanding on how this works.  I have been saying this forever as insurance companies do it with active models working to find loopholes on every step that a law takes in it’s creation.  They know the loopholes right up front and strategically play them as they benefit for profits.

A former Wall Street Quant, Cathy O’Neil makes this case perfectly clear with her blog post from a few days ago “We Don’t Need More Complicated Models, We Need to Stop Lying With Our Models” and who’s better to say than her as she does that for a living and has worked on both sides.  The sooner that the government and others come out of “shell shock” here and realize what the technology is that is used on the other side, the better off we will all be as the future with regulation and finding fraud depends on making companies accountable by verifying their models and what techniques they are using.  Too many folks blindly believe everything on the screen, like the ones who end up in dead end streets listening to everything their GPS unit tells them:)  I love that correlation as it tells you to listen to your common sense and not get carried away with Algo Fairies that lurk out there.  So don’t forget we do have common sense as humans and don’t let that GPS unit or other algorithms convince you to 100% buy in and drive your car or yourself over the cliff.  Ask questions when something doesn’t seem right.  BD

On April 5, 2012, in the Rose Garden of the White House, US president Barack Obama signed the Jumpstart Our Business Startups Act, one of those distinctly American pieces of legislation that hits you over the head with an unequivocally positive acronym--in this case, JOBS. The law, parts of which went into effect right away, was intended to help startups grow and, in the process, add more jobs to the US economy. Exactly a year later, it's worth taking stock of how the JOBS Act is doing.

The JOBS Act was supposed to encourage smaller companies to go public. Startups, it was argued, were delaying IPOs or avoiding them altogether because of the regulatory burdens, stunting potential growth in the American economy. So the JOBS Act greatly reduced the disclosure and accounting requirements for IPOs by companies with less than $1 billion in annual revenue.

But in the year since the law went into effect, just 63 such firms have gone public, down from 80 in the previous 12 months. That's a 21% drop despite improving economic conditions. And in Silicon Valley, at which many provisions of the JOBS Act were explicitly aimed, the situation is even more dire: only eight venture-backed American companies went public in the first quarter of this year, raising $672 million, compared to 19 such IPOs that raised $1.7 billion a year prior, before the law was signed. The dot-com boom this is not.