This is amazing that the fear of standards is creating a situation to where the FDA has to go get a court order to inspect and obviously they are being granted as we have some results of some of the inspections.  I guess companies are fearful of what could be found.  The Feds and state laws seem to conflict a bit here and the FDA legally does not have the authority on their own to

conduct some of these visits.  I would think that the states and the Feds would collaborate a little bit better here.  Clean rooms appear to not be as clean as we thought.  Certainly the requirements are more strict than they have been in years past and nothing happens until people die it seems.  The cost of keeping up machinery and other devices used is probably rising too.  It was just a few months ago we had people die by contracting fungal meningitis from drugs that were compounded at the New England Compounding Center in Massachusetts.  We all discovered how much compounding was being done and how it grew over the years, and much of the rise in business was cost related, not all, but a lot.

The cost of clean rooms and keeping them that way appears to be rising in cost as well as everything else.  In reading this article we have Congress doing the blame shift thing again asking if it could have been avoided.  Well shell out some more money to fund such investigations so they 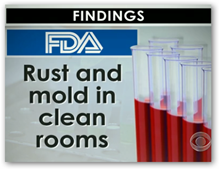 can be done on a routine basis.  That is a big part of the issue.. money like everything else and my suggestion here is to license and tax the data sellers making billions in profits selling data to help fund efforts as such for the FDA and the NIH but nobody can seem to get their heads around the intangible gold mine of profits just for writing some code and it hurts consumers too as more and more is getting used out of context.  Data selling and the adverse effects in the US is at the epidemic stage right now to make a buck and nobody questions their models or algorithms.  A couple good related links below on taxing data sellers.  You know with all the corporations too hiding money outside the US, what a good opportunity to collect some taxes from them with a system modeled as a sales tax, good for consumers too.

You can’t use an algorithm to replace on premise inspections for sure.  The Feds and states need to get their acts together on the clean room standards.  BD

(CBS News) More than 700 people have become ill and more than 50 of them have died of meningitis since a pharmacy in Massachusetts manufactured thousands of vials of contaminated steroids. It's the worst pharmaceutical disaster in recent times and it's drawn attention to the rapid growth of compounding pharmacies. There are thousands of them in America making high risk drugs, but they're not supervised by the FDA. Since the disaster, the FDA has been looking into this.

"What we're seeing now," said Sarah Sellers, a former FDA inspector who now consults for the pharmaceutical industry, "suggests a much more systemic problem and that will need to be considered in both state legislation and federal legislation moving forward."

Over the last two months, Inspectors reported finding black particles in vials of injectable steroid at one company. Rust and mold were found in clean rooms at other compounding pharmacies as well as tears in worker's gloves that exposed their skin.