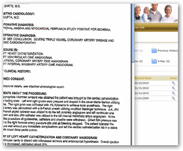 happen with Unis-Tonghe licensing the technology using HL7 standards.  The EMR system will populate the PHR system to include doctor’s notes, which we don’t always get all the records here in the US in our PHR.  That’s a discussion for another day and has been on this blog before too.  The company is also releasing their first HL7 connection with EHR company 4Medica in the US.

In addition the company has licensing agreements with 4Medica, Interbit Data and a few others while patent complaints continue with Walgreens and WebMD and several other large organizations.  I have a back link to the listing of the MMR Global patents here on a back link.  BD

LOS ANGELES, CA -- (Marketwired) -- 04/30/13 -- MMRGlobal, Inc. (OTCQB: MMRF) ("MMR") and Unis-Tonghe Technology (Zhengzhou) Co., Ltd. ("UNIS") today announced that the two companies will begin offering an Electronic Medical Records ("EMR") system with an integrated MyMedicalRecords Personal Health Record ("PHR") to be sold through the two companies previously announced Joint Venture, Unis Tonghe MMR International Health Management Service Co., Ltd. ("UNIS/MMR"). MMR will begin building the first integrated version of the system in the U.S. working with licensees and existing strategic business partners. The platform will utilize MMR's patented PHR systems to offer two-way connectivity with any EMR or EHR system in hospitals and other ambulatory care centers. The system will also use an integrated HL7 interface to populate data from the UNIS/MMR system directly to patients through their PHR including chart notes, lab test results, medication lists and other discrete protected patient data. The Joint Venture was formally submitted for approval to the Chinese government in 2011 to operate in China through 2042.

The primary focus of meetings between Luo Jianhui, Unisoft Group/Unis-Tonghe Technology Vice President and Chairman, and Robert H. Lorsch, MMRGlobal CEO, taking place in Los Angeles Sunday through today, was to discuss offering the turnkey solution in the Asia Pacific region using MMR's patented technologies to integrate with a the UNIS/MMR platform. This enables the venture to offer services in Asia Pacific countries where MMR holds existing patents on its medical records systems IP. According to Mr. Lorsch, "The Joint Venture was originally formed to only sell MMR's patented Personal Health Record technologies under license to the JV. The plan was for the JV to sell the UNIS/MMR products and services to hospitals, physician groups and consumers in China. However, at this time both sides see a benefit in delivering a total turnkey system which includes MMR PHRs integrated into the system. As the health Information technology market in China continues to evolve, we are preparing to offer a comprehensive solution to the market."