He starting to remind me of Blue Cross and their data mining to find out if their insured were buying clothes a size larger.  Anyway in reading this article he’s sucked in and watch the 4 videos in the footer of this blog to see how 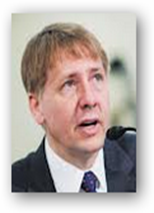 modeling, math and programming works.  Sub prime could not have happened without it.

Over a year ago I questioned how effective he would be with a law background and seems it’s about right on par with going to take time and analyze data and is so far behind the technology 8 ball he can’t see it.  When are folks going to learn you don’t put a lawyer in a job where technology expertise is needed.  The banks and companies will just model all around the agency by the time they figure out what is up and what is down.  This is not personal as I have said the same about other cabinet heads and I’m not alone.

We see stuff like this and it’s not how a technologist on a mission would act, plain and simple we  use logic and code and unless you have spent some time with a little technology, executive heads are a waste of time.  I do hope Elisabeth Warren’s office picks up the pace too because she’s about the best we have out there if she doesn’t get sucked into the old legal methodologies today that are too slow..  They just don’t get it and use all the wrong

methodologies when time is of the essence.  Sure you need lawyers to make sure all the legal areas are covered.  Tech folks just sit back and shake their heads.  Here’s what I said a little over a year ago and as a matter of fact it had all kinds of government agencies reading it and I posted it on a Sunday so that was kind of why I even noticed as I was having a busy traffic day and wanted to see what post was so hot.

in reading this article, it says the banks groaned and moaned but shoot they are so far ahead with their modeling and anything the government

comes up with, well the banks and many companies have already been there and done that.  If he only could understand the models that banks, insurance and other companies build.  Read up on Algo Duping for your own information too.  With all the hacking going on right now creating yet more data to secure..well I’m sure the banks and companies might sell his department the information too, as data selling is an epidemic and none of them are missing a chance to make a buck.

Last time I wrote about Richard Cordray I recommended a book and I’ll do it again as I don’t think he has read it yet from what I am reading here in this article.  Also in the footer, watch the excellent video too from Charlie Siefe, Professor at NYU who wrote the book “Proofiness, the Dark Arts of Mathematical Deception”.    The other day on

Twitter famous author Tom Peters and I were talking about it and he went out and bought it.  We got on the topic as we were discussing Christopher Steiner and his book and videos on how algorithms are taking over, “Automate This” and  so Proofiness is the next logical book on this topic.  The book is good and clears up a lot of nonsense, again Algo Duping.  Heck I wrote many posts on this blog on bad algorithms that are used out of context in my Attack of the Killer Algorithms too, over 50 Chapters of every day abuse with consumers so we can’t learn from those right?  We are addicted to data and this massive data base is going to take a while to build and gee, guess what it’s going to fall into one of those potential wasted efforts as half of all the analytics bought will be a waste.  Heck I even have bankers agreeing with me there but folks without something besides a legal background can’t get it.

Anyone today with some knowledge of how banks and companies work knows that they are pretty much just software companies that control and move a lot of money and until their models are questioned and maybe even certified as built by the Quants, inequality grows.  That’s a good link above as and here I am again as a consumer advocate agreeing with an incognito banker again.  He’s one crossing a little bit over so he remains anonymous but he knows quants, algos, models and so on so we can talk and shoot if that is not enough for one to give some thought to a new direction instead of building data bases and getting lost in trying to find value in this area with the Big Data dupe, I don’t know what is.

Do something constructive and get some real money back over to the consumers and get some privacy with IT infrastructure to support regulating it..license and tax the data sellers, Walgreens making around a billion a year selling data, nice quarterly taxes and revenue on that one and that’s only one.  States do some of this anyway with licensing but get it big time and have a federal site disclosing what kind of data they sell with their license and to who.

The $460 million is a drop in the bucket compared to taxing data sellers, which is by the way an epidemic in the US but again we have a lawyer

who can’t understand servers, algorithms, models and how models shift the money.  What a disappointment with this effort and again he too…just Algo Duped and no clue.  I swear the cabinet seems to be catching that GOP virus that is going around when it comes to brains.  This is just so sad when one can think logically as I and other do and watch the nonsense and continued duping with banks and companies who just roll in more money and keep the complexities rolling every where they can as that means consumers in the dark and more money for the wealthy.

Last but not least, it’s all about context and we already have models, math and code being used against consumers and the data keeps getting additional flaws as well.  I like the video I put at this post as you can hear NASA, Ford and several other companies saying “what in heck are we doing with big data, where the value” and they talk quants as well.  T-Mobile gal was spot on with what they were doing, said it was silly.  BD

The Consumer Finance Protection Bureau is following the example of big companies that mine pools of information for insight into consumer behavior. The agency maligned by big banks for being overaggressive is assembling a Big Data operation to monitor how millions of Americans interact with lenders and rack up debt.

The two-year-old CFPB—which recently announced it’s recouped $425 million for consumers wronged by financial-services companies—is building massive data sets with records from companies it oversees. It’s demanding information on credit cards, credit monitoring, and debt cancellation products from major banks, and spending more than $10 million to buy data on auto and payday loans as well as mortgages from Experian (EXPGF), CoreLogic (CLGX), and other companies. “Within the next year,” says Sendhil Mullainathan, the consumer bureau’s assistant director for research, “CFPB will be the best place for consumer finance data.”