Home » My Commentaries » Need a Laugh » Technology » What’s A BitCoin? “You Can Do Anything With Software”- The Colbert Report–Another Software Model With Subsequent Non Stable Algorithms That Execute Something..Maybe Your Dollars…

What’s A BitCoin? “You Can Do Anything With Software”- The Colbert Report–Another Software Model With Subsequent Non Stable Algorithms That Execute Something..Maybe Your Dollars…

So the Colbert Report takes on the BitCoin…love it.  He’ heavily invested he says:)  The whole purpose of his video here is to “show what folks can be talked into with software”…we are in many ways victims of our our infrastructure and and it is “gold for geeks” he calls it.  I love the description, 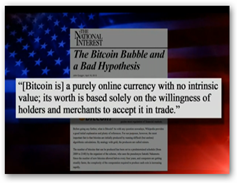 based on what the individual finds value with some fancy algorithms.  Hey we are just discovering a lot of this in healthcare too by the way with folks exploring some  non linear models..ahemmm..and boy are some of them out there. I said not too long ago that banks and insurance companies are just software companies anymore too so I’ll be darned this is what banks and Bitcoins have in common but the banks haven’t figured out how to manipulate them yet for profit, they tried though:)  The link below has a video that discusses this and the dangers of being too sucked in at times.  Algorithms move money.

The concept of the bitcoin to give anonymous identify though is a good idea and shortly those needs will need to be addressed whether it is bitcoin or some other software derived system.  It’s been fun to watch it for the last year or so, especially in the last few weeks being all over the news.

In a lot of the new big data articles a good point made that we are driving ourselves over the cliff with not using our common sense as we are duped into thinking that screen is always right, it’s not.  The Algo Duping videos explain a lot of this in the curated group.  Hey when’s Blue Cross going to accept Bitcoins:)  Sorry, was time for a little satire with that remark.  They already buy up all your master card and visa data so with the data addictions insurers have, they’ll be trying get your bit coins too:)  More about the data cliffs at the link below.

Now how do banks model and do all this stuff?  Watch this video and you will be enlightened as to what a model is and insurers as well as banks and companies use them. After watching this, next time you might ask the question when something looks fishy “did you just use 6”…fantasy models as Quant Paul Wilmott shows us that there’s no science all on some of the math concoctions that are created and that can lie and deceive.

Some companies and banks don’t pay attention to accuracy and create them to make money, so take a look here and let’s hope banks don’t figure out a way to get more of our money with a “BitCoin Model”…(grin) as they did with dollars.  As Mike Osinski says in the video below “you can do anything with software” and how well we remember that with sub prime as none of it could have happened without software..bitcoins are just that as well. BD