As I have already said a few times this is an “epidemic” at least here in the US and could be world wide too but we are bit so much worse in the US.  Local state governments already license data selling bots by the groves to make money.  Sometimes it has back fired with the states getting way

overloaded with data mining bots and the servers slow down to a crawl.  As consumers we end up suffering and more flawed data is created plus with more data being stored and queried out there, our exposure to hacks increase.  If they don’t hack one site they can go to another.  We have learned that well in healthcare with so many breaches occurring with 3rd party consultants.  Every hospital CIO has that fear and they pick the best that they can but they have no direct control over what they do with the data.  Remember Accretive…there’s one example as to when the consultant promises results and we didn’t find out until a notebook was stolen that was being used to show actual patient files to a Wall Street investor.  Why were they doing that?  The hospitals were more than likely looking for money but again as a 3rd party vendor some lines got crossed in HIPAA violations in their mission.

We just don’t know when to either stop or slow down in thinking there’s some tiny piece of data out there that will save billions or trillions.  I love those headlines that we see all the time as you know they are trying to sell you something as most of it is just marketing to sell you something or get you to join a cause.  They do it all the time and it has been done for years. It’s the old “throw numbers at them” to get attention scheme, older than the hills but used on the internet extensively.  That’s not to say all numbers are bunk as they are not, but when ever you see billions to be saved and especially “trillions” you know they are reaching as we work with so many unknowns today as algorithms move and shift money and data.  The studies are probably right in the fact that what ever the cause is will save money but they can’t put their finger on it so we get the “trillion” word to really stir you up.

With all the government cut backs I don’t put it past any agency to try and make a buck here and there and IRS is no different.  So they are going to look at your Twitter and Facebook data…

so where are they going to get it?  What data base are they going to pay for to allow for quick searches, especially with Twitter.  Someone can lie on any of these and so we go back once more to “noncredible” data.  Noncredible data can and is helpful for trending information for sure and how companies like Recorded Future operate which is funded by both Google and the CIA.  I don’t see any issues with trending data to see a bit into the future at all but when you bring some of it down to the individual basis, you get crap as developers create models and algorithms to make money with ridiculous no linear formulas.  IRS has plenty of data base engineers to create something that will generate money selling our data.

Happens all the time and you get duped, duped and duped again.  What is the IRS going to do with the data once they have satisfied their small interest as they say…chances are they will query it with other data bases and sell it.  That’s what they all do as you read in the news about some new analytics that will predict behavior all the time.  At this point it’s easy to predict this behavior from the data sellers for sure.  It’s the game and they don’t know when to stop and think they will find some magic model or code that will be unlike anything else created or seen (grin).  It’s the way novices think about data that don’t know the mechanics of how it all works.  The IRS has another lawsuit stating they violated HIPAA so again I will say it again that data selling is creating a lot of issues since it has reached epidemic stages as the lure to make “easy money” to to ignore laws to get the information one wants is so easy as there are no real IT Infrastructure sound laws out there.

Another good example is this latest one about insurance companies buying our MasterCard and Vista spending data.  Blue Cross said they don’t use it for underwriting but are rather looking for people who start buying a size larger clothes…(grin)..well they also get all your other spending habits and who knows what other data they will query it with.  If you don’t believe that, look at the want ads for analytic people and insurers top the openings out there looking for data mining people all over the place.  You reach a point and say how much do they really need and does this expenditure fit into the MLR?  I’m sure it’s in there somewhere as it’s not cheap working with all this data.

The funny thing is though about the size larger clothing is that obesity and being over weight is not a secret and it’s very visible too (grin)…so are they wasting their time here?  Does Blue Cross, United, Humana and all the rest really need this?  Again I ask what other data are they going to query it with and sell to make money.  United Healthcare of course is hands down the #1 manipulator here with all of this making billions and putting out reports and they use that “trillions” word a lot as they want attention and use

Now with all this data selling going on when does it get updated?  That’s a good question as it varies a lot.   Many states threw 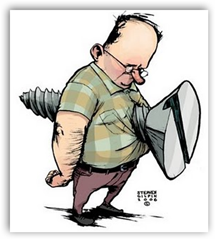 out some of the data mining bots especially in the credit area as they would not get the quarterly updates, so were they too cheap to pay or did they not want to re-work their data bases and update all those they sold to?  The last answer wins.

If you have ever written software then you understand this completely as that’s what developers do, we look for relationships and query data to add more value, no matter what we are writing, it goes with the job.  However, now we have an epidemic to where we have greedy CEOs and others who want their data scientists to grab some more money by writing code and again I said government is not beyond this.   Kind of funny the Onion did this satire video on the CIA and Facebook…well it turned out a year later they were right with using Facebook data when they admitted so…watch the classic Onion video at the link below.

When Satire Becomes Reality–CIA Admits to Full Monitoring of Facebook and Social Networks Just As the Onion Satirically Published Last Year..Not A Joke Any Longer It Appears With Privacy

Everyone is throwing code at the wall to see what sticks and yes there are some very good big data efforts coming forward too, but there’s a lot of junk as the data scientists as they are called don’t know what they are looking for either.  You read it day in and day out but the over all message the consumers gets is “we need big data” so that’s all they hear and if someone is using big data, then in the consumer’s mind they are really doing something…well..not all the time:)

So again, you get your average SQL coder and the first thing we do is look for relationships and connect items for value.  With linear data it has been done this way for years but enter the world of non linear data, the stuff that Wall Street used for an example during Sub Prime…do I need to say more on the insane models that were produced and the Algo Duping that went on…we all got sucked.  Good video below with CIOs from NASA and many other industries discussing their questions with big data and how their quants will work with it.

Any efforts at privacy laws have not been very good as they don’t line out an IT infrastructure for regulation at all, and shoot that’s what runs everything today so I guess we are back to thanking digital illiterate lawyers for that who can’t see the light at the end of the hallway.  More at the link below for Laws with no balls.  Great video from a former Wall Street model builder/quant and she will explain where I leave off.

I have a series called the Attack of the Killer Algorithms and more at the 2 year old post below.

I keep telling you non data mechanical folks out here that this is the way it works when people get a data base in their hands and start querying…what else can I build..it’s the way we think…and some go the wrong direction with it and some get addicted.  We are just so duped into intangible values right now this is why we can’t create jobs as manufacturing gets left holdi

ng the bag as we have a country that wants to base an economy on selling and buying data instead of some other tangible efforts.  Certainly there are tangibles in the US, lot of them but they don’t get the rush on Wall Street like a company that produces algorithms does.

I think the government is totally bliss and unaware to give them the benefit of the doubt but again with this IRS story, what are those developers going to do with this data?  They are going to try to figure out how else to use it and make a buck at the same time if they can.  It is what it is.  We have a sketchy story here from the video that doesn’t really answer enough but maybe we will hear more later, so again based on what other agencies are doing and the belief of many department heads that algorithm fairies fly around out there, it seems to me this is the route the IRS is looking at too.  Nobody buys data and lets it sit around as it’s so easy to find a market for it as the digital illiterates think all of it has value.

It’s time for my usual plug on the Algo Duping page or your can scroll down to the bottom of this video and get educated.  Also worth reading is the link below and see how much of the time you send common sense out the window and let bad technology drive you off the cliff.  Heck there’s plenty out there in Government that have been off the cliff more times than I can count I swear.  I guess we also need to license and tax government entities too, they are making money selling data all about us.  BD