This was a talk given by Cathy O’Neil at Columbia University a few months ago.  At about 18 minutes in to the video she discusses the healthcare end of models…

insurance companies using segmentation in the opposite direction. How likely are patients to get sick, it’s a death spiral model.   Insurance is to pool risk and we all get a safety net…what we have today is not “real” insurance.  I like it when she talks about the de-identification farce too as she’s right on reconnecting data.   Heck I did some of that years ago just in the process of writing software to verify the accuracy of software and my queries and to think about 3 years ago this was such big news all over the place in the media and I said at that time it’s not that hard and can be done.   I really have to give credit here for having the courage to speak out when so many for years have not.

Granted today it is getting to be a little more difficult as encryption methodologies and more “salting” takes place to rematch data.  You almost have to think today that for every process out there that works, there might be another out there who knows how to undue or unlock it.  Security breaches anyone.  With all that is taking place with modeling the insurers just might end up modeling themselves into a single pay system by accident with current addictions and non value producing non linear analytics.  Half of all the big data analytics investments will be a waste of money as the creators don’t even know exactly what they are looking for and how to find those potential relationships in billions of records.  With the link above I’m agreeing with a group of Australian bankers.  That type of work is what science does and it takes years.

Segmentation modeling goals identify those who do have enough money and squeeze them for all they are worth and for those who don’t have much just get them to click as much as you can she states.  Get those profiles going and created.  Models are being trained on Americans to be used in other countries and are used for the convenience of political systems sometimes as well she states.

People who own the models are the corporations…”hedge funds are set up to hose pension funds” she states…one sentence.  She said too of working for a hedge fund that nerds are never in control

…”we are going to use this model as it gives us the answer we want”…”that is really a useful model to make a lot of money”.  There’s another good video on this topic done by Christopher Steiner and it’s in my video collection of Algo Duping.  You can also use this link back to my original post where he talks about how algorithms are taking over the world and he gives some real good every day examples…and asks the question when do some of the algorithms and the companies/people who deploy them cross the line from being a utility to being a “menace”.

In addition she covers the code of ethics for data scientists, which is created by those working in the quant field and goes back to the Financial Modeler’s Manifesto from Emanuel Derman and Paul Wilmott as featured too in the Quant documentary referenced below.  There are some variations being written as well and one sentence kind of goes like this below and this was generated mostly due to the abuse of models that allowed the subprime scam to occur.

“Mathematician skills are almost autistic she states…funneled into a vision” and she apologizes as to not mean any offence as she’s in the group too.  Creating models becomes a a game to win and there is no consequence for the creators.  LIBOR she says was an “open secret” as banks didn’t want to appear vulnerable.The last time a bank appeared vulnerable it was Lehmann and nobody wants to be #2 there.  I can say this too though as a developer there is this burning desire to always make things more efficient and get more information that is useable to the screen, we all do it as that’s what writing software is all about but sometimes when there’s big money involved things can be skewed and that motivation takes a little different turn.

and don’t be logged in to Gmail when searching, it gets sold and forget Facebook.  If you are logged into Gmail and search for hepatitis that is collected and gets sold to people trying to hire you.   The discussion about the start up company from a former Google executive is interesting as well.  A few months back I made this post, kind of saying the same thing and addressing the fact that even the data scientists are stumbling around with trying to find value.

Cathy still models and is optimistic and that is how she became interested in helping the Occupy movement get educated.  I agree on the privacy issues and have had my win-win campaign here for quite a while to license and excise tax the data sellers, just as I am excised taxed when I buy a tire for my car, except this time the ones taxed are on the other side as they benefit and profit, not the consumer.  Companies are sitting on $1.7 trillion in cash today as reported by Bill Moyer this week.

I guess I relate to all of this as my perception too of the Occupy Movement was exactly along this line with the modeling and financial algorithms that had been designed and worked.  Don’t ask me why I saw it that way but I wrote it up as Chapter One as the Attack of the Killer Algorithms that their cause was all about what they could not see and understand but felt it was ok as they were at least bringing to light that something was not right.  You can go back and look at my time stamped blog post from October of 2011 right here where I even suggested that Michael Moore should make a movie about it.  Now I am up over 50 chapters with every day occurrence, mostly all consumer related of when algorithms running on servers cause havoc, deny service or take your money.  I think this is good that she is taking the time to educate, and the more financially literate we are, it should make it a little more difficult for 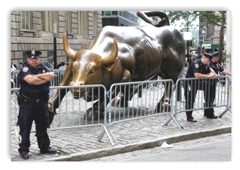 those writing models and code to get away with it.  One of the most prolific documentaries I have seen on the subject which I have recommended many times is the video about the Quants of Wall Street as it offers the layman an educational view as to how some of this works.  Even those in technology may not have seen this side of business either as we work as developers and are tunnel focused on what we are doing.  Scroll down to the footer of the blog and it is there with a few others that offer knowledge.

Hang in for the Question and Answers at the end where she discusses being “right” and talks a tiny bit about working with Larry Summers, (Wikipedia)  the debater.  I just read one of his Huffington Post articles today and to me, and my opinion only, I find it very strange and more like something someone would say who’s running for some kind of office?  But again, I do more logical thinking than putting too much effort into the OMG media that’s out there but one other source thought it was outstanding?  Huh? Logic and OMG don’t see eye to eye and I’ll take logic any day.  Back in 2011 I was impressed with this TED video to where a very difficult topic was discussed “Relying on experts that really don’t exist” other than in perception.  Good video on the addictive processes and paradigms we still carry around with us sometimes and the over reliance we create.

Back on track, Cathy offers a good discussion on why mathematicians think they are always right.  They are trained not to think 2 dimensional she states.  Logic is used, she states and I relate to that as if you read here often enough that is what you hear from me while I avoid almost all of the OMG “stuff’ that I can because most of it goes nowhere.   She gives a good insight into how mathematicians think and why they get the automatic recognition they do.  Being a Mom she said is what kept her from getting rolled in to the over all Wall Street psyche she states in closing.  Hybrid folks with more than one point of view are hard to find and even Bill Gates a couple years ago said those were the people in the future that would have real value.  The video lecture is great and I hope we keep hearing more from her and others in the field.  BD