This like makes you sick and under cover the doctors worked with authorities to catch the CEO.  5 of the 28 patients also died.  Bank accounts were seized and state and federal workers took over of ensure the safe care of the 40 inpatients currently there.  Four doctors were also charged with receiving kickbacks and it possible that more could be charges as the investigation continues.  There were also reports of some non required penile implants.  All of this took place over 3 years and most patients were living in nursing homes and were referred to the hospital.  Medical licenses for the doctors is pending.  BD

The doctors called it “snowing the patient” — and the alleged scam 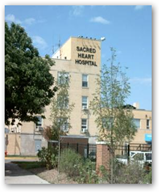 was as ghoulish as it gets.  First, a doctor at the West Side’s Sacred Heart Hospital deliberately over-medicated patients so that only the whites of their eyes were visible, federal prosecutors say.

Then, when the drugged patients were too drowsy to breathe unassisted, a surgeon had the excuse he needed to cut a hole in the patient’s neck.

The surgery ­— called a tracheotomy — wasn’t necessary, the feds say.  And 5 of the 28 patients the unnamed surgeon operated on died within two weeks — a mortality rate three times the Illinois state average.

Edward J. Novak, the for-profit hospital’s 58-year-old owner, pushed for the tracheotomies, which he called his “biggest money maker,” according to the search warrant affidavit. The Park Ridge man was arrested and charged with running a massive kickback scheme, paying doctors to refer cases to Sacred Heart’s facility at 3240 West Franklin, regardless of medical need so that they could scam Medicare and Medicaid out of cash.