desert.  I remember the challenges as at the time I was doing some contracted training for Intel and they had a car in the race as well that was right up there with competing with Carnegie Mellon which is where the GM technology comes from.  When I did a short presentation on the topic it was funny as all the young adults immediately said, he we can drive drunk now and the car can handle it (grin).  First thing they said, was funny, but who knows down the road…hmmmm…but not holding my breath on that one.  The link below has a video from Intel showing how the brains of the car work and all the technology used at the time was off the shelf, 4 servers in the trunk.

Then Google got in the acts with their cars as well and we have heard about their cars in a few areas, like Nevada are road legal as long as there’s a human at the wheel.

The car makes all the decisions on when to change lanes, when to stop..and there’s a Congressman involved in how the technology will be used…well they better get that Office of Technology Assessment reinstated soon or all the folks will be lost as hell, as if that doesn’t pretty much exist today.  BD

(CBS News) CRANBERRY TOWNSHIP, Pa. - It's been a year since California passed a law letting driverless cars on the road -- and major automakers are now busier than ever building vehicles that don't need you. 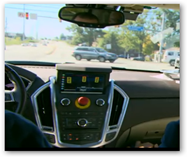 It looks like an SUV driven right off the showroom floor. But this Cadillac SRX is not like anything you've seen before.  "So my feet are just sitting down here," said lead engineer Jarrod Snider, demonstrating inside the car with us, "my hands are off the wheel. And you will see that it has to operate the breaks, the throttle, the steering, thrust, turn signals."

Carnegie Mellon's researchers say these cars will likely roll out in the luxury market, but eventually could add just $5,000-$7,000 to the cost of a new car. A small price for your very own chauffeur.

Sunday, October 13, 2013
My Commentaries , Other Items of Interest , Technology